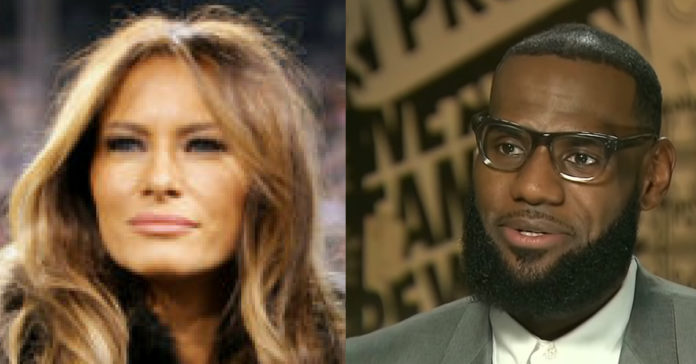 Melania Trump is all elegance and class. Despite living in the fishbowl Melania continues to exhibit grace under pressure and lives by her rules.

After the feud between her husband and LeBron James went public we thought that was the end of it.

But Melania just came forward and stunned LeBron James with a classy move effectively wiping the smirk right off his face.

The first lady’s spokeswoman on Saturday said Trump is supportive of James’ work with children.

“It looks like LeBron James is working to do good things on behalf of our next generation and just as she always has, the First Lady encourages everyone to have an open dialogue about issues facing children today,” Stephanie Grisham said in a statement to CNN. “As you know, Mrs. Trump has traveled the country and world talking to children about their well-being, healthy living, and the importance of responsible online behavior with her Be Best initiative.”

Grisham’s statement comes just hours after President Donald Trump posted a scathing tweet questioning James’ intellectual capacity. The President appeared to be responding to an interview James gave to CNN’s Don Lemon, which aired Friday night, in which the NBA superstar said he wouldn’t sit down across from the President if he were given the opportunity.

The first lady, however, is apparently unaffected by the animus James has toward her husband, nor does she appear to be letting the President’s statement about James affect her own feelings on the matter. Grisham said Trump would even consider visiting the school that James opened last week in Ohio.

“[The first lady’s] platform centers around visiting organizations, hospitals and schools, and she would be open to visiting the I Promise School in Akron,” said Grisham.

In choosing her official first lady platform, Trump picked something that involved teaching kindness on social media, something her husband clearly does not practice, even though she continues to face widespread criticism for that decision amid cries of hypocrisy.

Melania is one smart cookie…the ball is in your court LeBron.