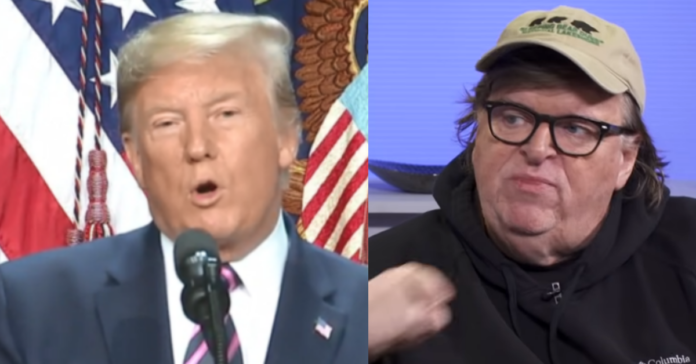 Michael Moore is ramping up his hysterical attacks on President Trump and it may be a sign the liberal filmmaker and one of the few who called Trump’s historic win in 2016 is getting nervous.

The race is tight and the polls are offering wildly different predictions. In Florida, some bad signs for Biden have been noticed – young black support is trailing Hillary’s in the Miami area as well as Hispanic support in the same part of the state.

While in Texas, Trump is improving his Hispanic support. So the left is bringing out the big guns to make the wild accusations.

Moore is now accusing President Donald Trump of “killing off his voters” with his handling of the pandemic.

Moore said Trump “has done everything he can to lose” reelection, adding he wonders if Trump wants to lose.

“You’ve got a president that has done everything he can to lose to the point where I’ve been wondering some days, does he really want to win?” Moore said.

“Any other president would have seized the coronavirus, taken the reins, and tried to have been the hero, especially when this was killing his largest demographic in 2016 was over 65. Instead of coming to their aid and defense, he let them die.“

“And now we’re having this huge wave — the largest day ever with coronavirus was, I think, Friday. You know, you had Dr. Redlener on MSNBC saying this could get to 2,500 deaths a day.”

Moore added, “Why Trump would be killing off his voters, historians and political scientists are going to have to figure this out in the future.”

“He knows that the American people are sick and tired of these four years and cannot wait to see him go.”

Ha. Ok. Thank you.
But with Trump, take NOTHING for granted. Yesterday in Michigan he held a rally in a “blue” county-Muskegon-which Hillary won in ‘16. Thousands showed up on Sat. to cheer Trump on. As much as we hope Trump will be crushed, act as if he might pull it off again! https://t.co/r7OQq5Mht2