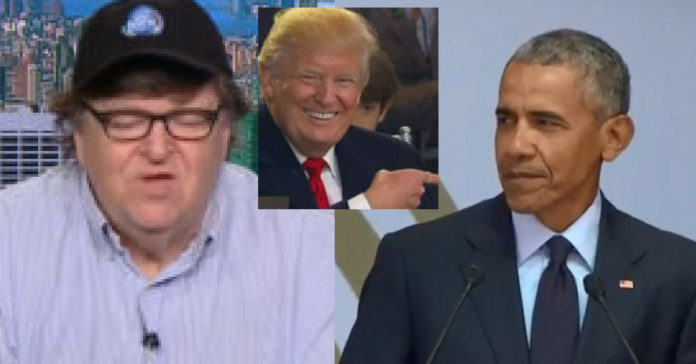 Michael Moore has a new movie coming out and it is a Trump bashing marathon. Moore does his best to twist facts to make Trump look incompetent.

And he thought he got away with it, except the internet does not suffer fools and promptly put Mike Moore and Barack Obama in proper historical perspective.

From Twitchy: The filmmaker who was tight with Hugo Chavez spoke of his love of America and how enraged he’s become since the election of Trump

Perhaps America never had a democracy because it’s a constitutional republic, but we digress.

The title is a play on Moore’s biggest documentary released in the early 2000s and which tried to sound the alarm about George W. Bush.

So Moore flipped the numbers around to sound the alarm about Trump, but a certain former president also gets caught up in the mix.

Not unlike many in the media, some lefties’ seem unable to remember much of anything before Trump won the election.

And it’s not just Trump or the Gov that poisoned Flint who’ll wish I’d made that rom-com I’ve been dying to make. Like all of you, I’m on fire. This film is the result of my rage & my love for what may still be possible for the United States & 4 the Democracy we never truly had. https://t.co/W44aQPXUur

Was Trump even in Office yet when the Flint issue happened? https://t.co/20uTOLLxFz

Flint happened in 2014. Who was the president then? https://t.co/tYGvOWip2V

POTUS Trump poisoned nothing but you already know that. Decades of local mismanagement did but that wouldn’t fit your narrative. BTW, Flint has been granted $100 million to fix this, something else you probably won’t talk a lot about.https://t.co/F4QO06PUs5

Trump was responsible for the Flint water situation?.. wasn’t that during the prior admin?

Michael Moore Finally Agrees To Move To Canada On One Condition