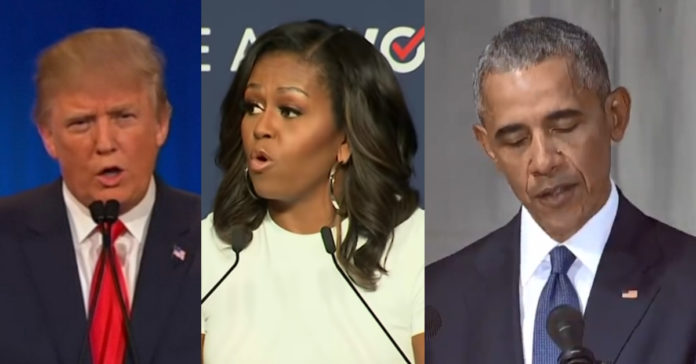 It used to be the former presidents and their wives stayed out of politics. At least until the next guy was done.

It is courtesy to be sure, but also necessary – the job is hard and the new guy will always face some issues and make some rookie mistakes. It is the nature of the beast.

We don’t usually have the last guy smirking on the sidelines saying I could do it better.  Look at me I can do it better. Which is laughable on so many levels. Especially considering the source.

As reported by The Washington Times: Former first lady Michelle Obama on Sunday complained about the “chaos” and “nastiness” in the political climate under President Trump, urging a crowd of Democrats that it’s up to them to change the course of the country by heading to the polls in November.

“Believe me, I am frustrated, too,” Mrs. Obama said in Las Vegas at her first rally for When We All Vote rally, the nonprofit voting initiative she co-chairs. “I am sick of all the chaos and the nastiness of our politics. It’s exhausting and, frankly, it’s depressing. So, I understand wanting to shut it all out, and just go on and just try to live your life.

“But here’s the problem, while some folks are frustrated and tuned out and staying home on Election Day, trust me, other folks are showing up,” she said. “Democracy continues with or without you.”

Videos of the event circulating on social media showed attendees chanting “We need you,” encouraging Mrs. Obama to run for president.

“Here’s what we have to do,” she said over their chants. “If we want qualified people that we trust, then people have to vote. Because you can’t vote some of the time and then sit out.

“You know, we saw that happen. We experienced that. But we had a great president,” she said, referring to her husband, former President Barack Obama. The crowd erupted in cheers.

“But every couple years folks sat out and said ‘well, I did my part, I voted once, I’m done, I’m out,’” she said. “And I’m just telling you that democracy doesn’t work that way. … Democracy doesn’t wait for you to be bothered. It moves on as it rightly should, and therefore the people who vote determine the direction of the country, determine the mood, the tone, and the people who stay out don’t get a say. And I want every American to feel the power of that choice.”

Obamas Officially Sign With Netflix. Get Ready ready for the BACKLASH