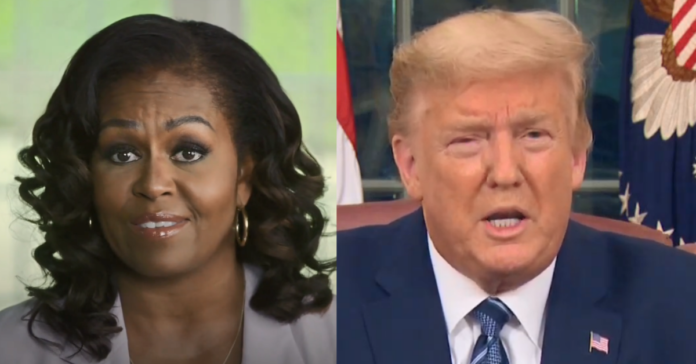 Michelle Obama is desperate and she is letting her desperation show. She took to social media to trash Trump and beg America to vote him out.

But she couldn’t just stick to politics and had to get in the mud and hurl personal and quite vicious insults at Trump going as far as to call him a racist.

“Right now, our country is in chaos because of a president who isn’t up to the job. If you’re a parent like me, you’re feeling the consequences of this president’s failure to take this pandemic seriously… from his constant downplaying of the importance of masks and social distancing… to his relentless pressure on schools to open without offering a clear plan or meaningful support to keep students and teachers safe,” Mrs. Obama said.

She said, “A man who had every resource at his disposal, the finest medical experts, our best intelligence… and yet ignored all the advice and failed to produce a plan to provide enough tests for worried families or protective equipment for our healthcare workers.”

“A man who knew how deadly this virus is, but who lied to us, and told us it would just disappear… who, in the greatest crisis of our lifetimes, doubled down on division and resentment… “

“Railed against measures that could’ve mitigated the damage… and continues to hold massive events without requiring masks or social distancing, knowingly exposing his own supporters to a dangerous virus.

“Today, more Americans have died from this virus than died in the wars in Iraq, Afghanistan, Vietnam, and Korea combined. Take all those lives bravely sacrificed… and double it. That’s roughly the scale of this tragedy. And our commander-in-chief, sadly, has been missing in action.

“But right now, the President and his allies are trying to tap into that frustration and distract from his breathtaking failures by giving folks someone to blame other than them. They’re stoking fears about Black and Brown Americans… lying about how minorities will destroy the suburbs… whipping up violence and intimidation—and they’re pinning it all on what’s been an overwhelmingly peaceful movement for racial solidarity. It’s true; research backs it up. Only a tiny fraction of demonstrations have had any violence at all.

“So what the president is doing is, once again, patently false… it’s morally wrong… and yes, it is racist. But that doesn’t mean it won’t work.

“Because this is a difficult, a confusing time… and when people hear these lies and crazy conspiracies repeated over and over and over again, they don’t know what to think.

“With everything going on in their lives, they don’t have time to fact-check falsehoods being spread throughout the internet.

“And even reasonable people might get scared. And the one thing this president is really, really good at is using fear and confusion and spreading lies to win.”

My heart goes out to everyone touched by this virus, from those at the White House, especially the Secret Service and residence staff whose service ought never be taken for granted, to all those names and stories most of us will unfortunately never know. https://t.co/dtEUrcjPAy