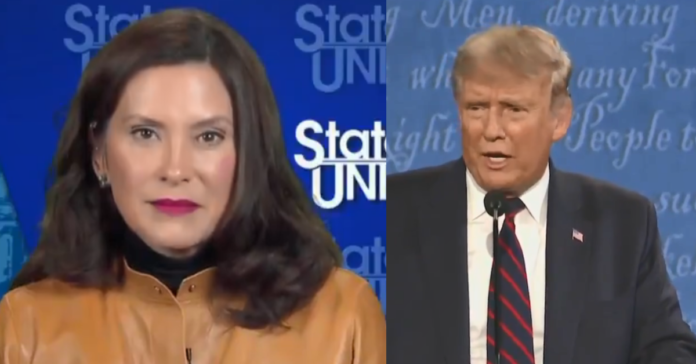 “Sick and in isolation, Mr. President, you have become a symbol of your own failures,” Tapper started. “Failures of recklessness, ignorance, arrogance,” he added.

But Tapper was not done yet, he smugly added, “The same failures you have been inflicting on the rest of us … Get well and get it together.”

The Trump bashing did not stop there. Tapper brought out Trump’s nemesis Governor Gretchen Whitmer (D-MI) to add to the disgraceful treatment of Trump.

Whitmer said, “We know Joe Biden has been tag this virus seriously and following the virus.”

She added. “The Trump administration, on the other hand, is not doing that. They are ridiculing mask-wearing and undermining the efforts of governors like me, and your earlier guest Governor DeWine is having trouble getting people to mask up.

“This virus doesn’t care what side of the aisle you’re on or what state you live in. Joe Biden is modeling the behavior we should all be emulating because our lives are on the line.

“Why I’m so enthusiastic about Joe Biden as our next president because he has got a plan to clean this up and depiction this mess that the Trump virus response has gotten us into.”

She added, “When a White House undermines our efforts to protect people, and when they threaten to hold the resources for a state that put them in the White House in the first place, people remember that.

“This is a moment where we need leadership that is focused on protecting every American, whether they supported who is in the White House or not.

“The American president should be protecting Americans, and that is where this administration has failed and has failed spectacularly.”

Michigan Gov. Gretchen Whitmer on Pres. Trump’s Covid-19 diagnosis: “He didn’t call the virus a hoax, but he called all of the concern, all of the efforts, he undermined that… And now we see that even he is susceptible to this. The most protected person on the planet" #CNNSOTU pic.twitter.com/IT6HQjOW7e

CNN’s @jaketapper: “Sick and in isolation, Mr. President, you have become a symbol of your own failures. Failures of recklessness, ignorance, arrogance. The same failures you have been inflicting on the rest of us … Get well and get it together" #CNNSOTU pic.twitter.com/XXA5uC91Ea