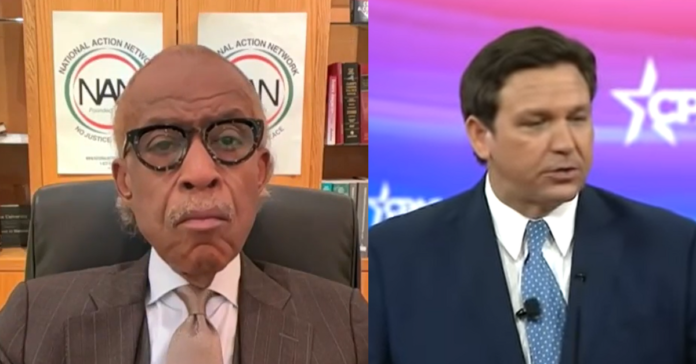 MSNBC host Al Sharpton trashed Florida Governor Ron DeSantis and Texas Governor Gregg Abbott Friday on “Deadline” over the border crisis. Al said: “This is as morally despicable as you can get. And I think that is an element of this that is racially tinged.

“It is not lost on a lot of us that they send them to Washington, D.C., to Mayor Bowser, to Chicago Mayor Lori Lightfoot, Eric Adams in New York City, all black mayors, and Martha’s Vineyard, which is a well-known place where the black elite have their homes including Obama. They get an extradition into their crowd. Let’s send them to these people of color that are in power.

“Of course, when they got to Massachusetts. There was no meeting with President Kennedy. There was no discussion of their rights. It was to mock them and use them as political pawns and almost as a joke to make their point about segregation. That’s exactly what DeSantis and Abbott is doing some 55 years later.

“It ought to be repulsive.

Speaking to Venezuelan migrant sleeping on the streets of El Paso that tell me that some of the migrants have been sleeping here for 4 days awaiting their bus ride to NYC @DailyCaller pic.twitter.com/QE4rk9iqXP

“You see children in there. Aren’t these the pro-life people? So you’re now so concerned about babies being born, but you’re going to have babies from Venezuela all over the country just being used as pawns on a political chess board,” he said.

Jorge Ventura, reporting from El Paso, said the shelters are so full some migrants have been sleeping in the streets for 4 days in that border town while waiting for a bus to New York City.

Most of the migrants have friends or family they plan to meet. They need shelter for a short period until they can arrange to get to their family where they can work as they wait for their asylum court date. Biden has them sleeping on the streets.

DeSantis got them a warm welcome in a beautiful place and because of the publicity, the National Guard had to step in so you know they will get to their families faster than the ones Biden left to sleep on the El Paso streets.

“Speaking to Venezuelan migrant sleeping on the streets of El Paso that tell me that some of the migrants have been sleeping here for 4 days awaiting their bus ride to NYC.

“Shelters in El Paso don’t have room to house migrants currently and many are sleeping on the streets. Lucas and Sebstian, 4 and 6 years old from Venezuela have spent the last 2 nights sleeping on the sidewalks here and tonight will be their 3rd.”

When you know what is really happening at the border it is easy to see why MSNBC reporter Cristina Londoño discovered the migrants were not mad at DeSantis but were thanking him instead.

Shelters in El Paso don't have room to house migrants currently and many are sleeping on the streets. Lucas and Sebstian, 4 and 6 years old from Venezuela have spent the last 2 nights sleeping on the sidewalks here and tonight will be their 3rd @DailyCaller pic.twitter.com/eSVnailtF6

“Most of them didn’t know Martha’s Vineyard existed when they were brought here. Some thought they had just landed in New York or somewhere. They didn’t know this was an island.

“And they left here a few minutes ago, they moved to Cape Cod to the joint base in Cape Cod with new clothes, new cell phones, having talked to lawyers for the first time, saying they were brought to paradise.

“On that plane some of them were promised they would get jobs, they were going to get housing on the plane that brought them here to Martha’s Vineyard.

“So, there’s activists here, Jose, that are saying that these people were victims of human trafficking.

“They want an investigation from the Justice Department into what governor DeSantis is doing.

“What governor Greg Abbott is doing, because they’re saying these people are being abused and used to bring a border crisis deeper into the country.

“I can tell you, they are not angry at Ron Desantis, they are actually thanking him for having brought them to Martha’s Vineyard, where they were very well received,” she reported.

MEDIA/DEMS: "Ron DeSantis is a human trafficker, a kidnapper, an unholy Christian, and is mistreating human beings as political pawns!!!"

When they ask the migrants, they get the wrong answer, “Thank you, Gov. DeSantispic.twitter.com/6BqlsZ4jpQ