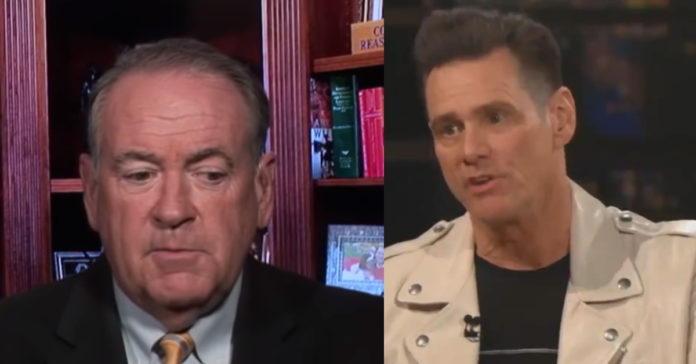 Jim Carrey is one of the biggest anti-Trump shills out in Hollywood and is usually as misinformed as any liberal graduate student.

That’s the thing with the far left – they are too removed from the real people, living behind they huge walls and up in their ivory towers, they are out of touch.

No doubts our health care system has plenty of inefficiencies but when the biggest problem is that the industry has bought our politicians for years giving these same corrupt bureaucrats more power seems risky.

‘Dumb and Dumber’ actor Jim Carrey on Friday urged Democrats to “say yes to socialism” and embrace the attacks from Republicans.

“We have to say yes to socialism — to the word and everything,” Carrey said on HBO’s “Real Time with Bill Maher” show. “We have to stop apologizing.”

The actor, who’s among the richest in Hollywood, made the remarks after Maher pointed out that Republicans criticize socialist and progressive Democrats by invoking the example of Venezuela, a failing socialist regime where thousands of Venezuelans flee every week amid dire living conditions.

“But that word—the Democrats need to get a plan to fight this slander of, ‘Socialism, you’re going to be living in Venezuela,’” said Maher. “And I don’t see it yet.”

Republicans have repeatedly slammed the Democratic Party upon the election of troves of socialist candidates in the primaries across the U.S., including Alexandria Ocasio-Cortez who became the face of the changing party following her shock win against one of the top Democratic lawmakers, Joe Crowley, in New York.

Enter Mike Huckabee who tweeted, “Jim Carrey, born in Canada, made MILLIONS in USA, and now says “Embrace socialism.”  You go first, Jim-give all YOURS away. Guess he is now playing both DUMB AND DUMBER.”

Jim Carrey, born in Canada, made MILLIONS in USA, and now says "Embrace socialism." You go first, Jim-give all YOURS away. Guess he is now playing both DUMB AND DUMBER. https://t.co/C9qTLYmlEi