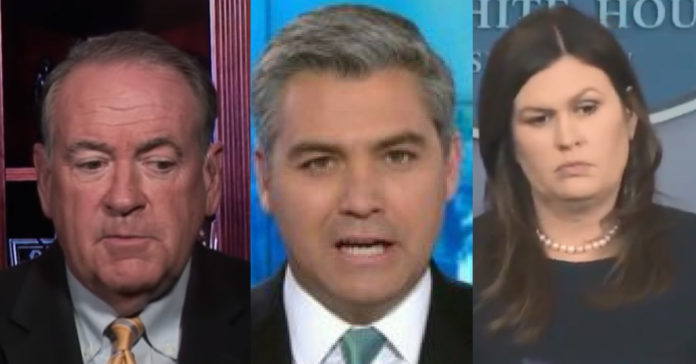 Mike Huckabee finally had enough and just destroyed CNN’s Jim Acosta for what he did to his daughter Sarah Sanders.

Mike Huckabee, the father of White House press secretary Sarah Huckabee Sanders, tweeted an attack on a CNN reporter who aggressively questioned his daughter Thursday about whether she considers the media to be “the enemy of the people.”

In one tweet, Huckabee referred to his daughter as “the WINDSHIELD” and Acosta as “the BUG.

In another tweet, Huckabee wrote: “Jim Acosta suffers severe nose bleed from the elevation of his high horse. Taken to safe space and provided with Play Dough, a popsicle, pictures of a pony to color and a puppy.”

During a briefing at the White House on Thursday, Acosta repeatedly pressed Sanders to say that she does not agree with President Trump’s characterization of the media as “the enemy of the people,” a description Trump has used repeatedly.

Just hours before, Ivanka Trump, the president’s daughter and a White House adviser, had said she doesn’t view the press that way.

Sanders declined to say the same thing, prompting Acosta to walk out of the end of the briefing.

Acosta whines if there’s not a briefing so he can perform for the cam & whines when he doesn’t get answer he wants from @PressSec https://t.co/TQWNktXYoC

Breaking wind from CNN! Jim Acosta suffers severe nose bleed from the elevation of his high horse. Taken to safe space and provided with Play Dough, a popsicle, pictures of a pony to color and a puppy. https://t.co/yLPkoRL7Bb

You probably heard about CNN’s Jim Acosta leaving the White House Press briefing in a snit because the Press Secretary refused his repeated demands to deny that the media are the “enemy of the people." My thoughts: https://t.co/gYvM62x0oZ pic.twitter.com/ZnIXR2TU1r

Mike Huckabee Beats Jim Carrey At Own Game, Sends Him Scurrying Back To LA With Tail Between Legs