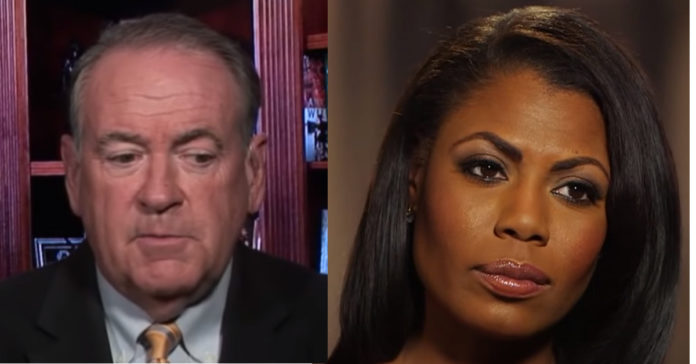 Mike Huckabee has had enough of the walking scandal that is Omarosa. The media, of course, is infatuated with the has been.

Remember, the media hated her with a passion not seen since Trump. They attacked Trump for even hiring her back in the day, forgetting that Al Gore and Bill Clinton both hired her to work in their White House too.

Just a bunch of hypocrites the media and the left are which is why a lying liar like Omarosa fits right in with the whole lot.

Enter Mike Huckabee to smack some common sense into all of them. Mike said on Fox Business of the shameless Omarosa,

“Interestingly though, she was saying wonderful things about Donald Trump throughout the campaign, throughout…a year or so in office, up until she got fired. Then she gets fired, she waits until the book comes out, now she can’t say anything nice, it’s all bad. So, here’s the question, which time was she lying? Was she lying then, or is she lying now, or is she lying both times? The one thing we’ve established, she’s a liar, can’t be trusted. And I don’t know why in the world anybody would give her a media interview and pretend that she has something credible to say. She doesn’t.”

Omarosa’s betrayal, her sense of complete dishonesty and disloyalty, is appalling. The only thing that it is equaled by is the fact that the very people in the media who had nothing but contempt for her before she started trashing Trump, now they just are eating her with a spoon. They can’t get enough of her. And I just find that absolutely revealing about the real motives of some of the media people.”

Mike Huckabee Beats Jim Carrey At Own Game, Sends Him Scurrying Back To LA With Tail Between Legs