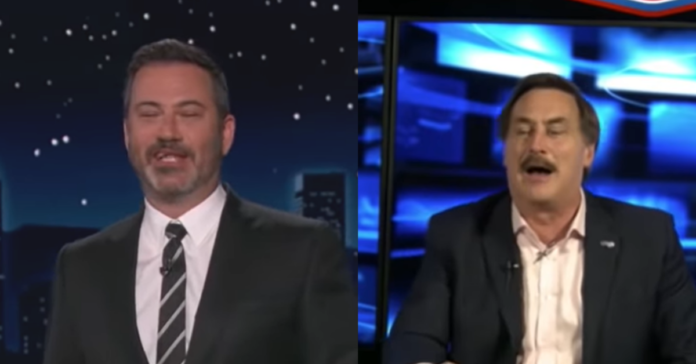 My Pillow Mike Lindell accepted Jimmy Kimmel’s challenge and has agreed to appear on Kimmel’s ABC show. “Hey Siri, set a reminder,” Kimmel said when he announced the move. “Next Wednesday night, we will be visited in-studio by the My Pillow man himself, Mike Lindell.”

After making the announcing Kimmel played a clip of Lindell talking about the appearance on “Frank,” Lindel’s new social media channel.

“Oh, this is breaking news here on Frank,” Lindell said. “I’m, wow. I’m open to it and I did promise them all, they’re going to get My Pillows in the audience.”

“I wanna thank Jimmy Kimmel for having me on. I will take all the hard questions that night, this is a blessing. I take this as a blessing,” Lindell said.

“Mike, we are Bed Bath and Beyond excited to have you,” Kimmel said after the clip.

“I will say this, for a guy who’s convinced that this town is filled with celebrity baby cannibals, he seems to have no reservations about coming out whatsoever.”

“He’s already on the road. He’s driving from Minnesota with a California King mattress strapped to the roof of his Buick and a trunk full of pillows for us,” Kimmel joked.

Kimmel has a running bit taking swipes at Lindell on his show but he may be no match for Lindell.

Jimmy Kimmel can’t get enough of MyPillow CEO Mike Lindell, and even made the Trump-supporting businessman’s “48-hour yell-a-thon” a central part of Monday night’s monologue.

The host kicked off Jimmy Kimmel Live last night with a shout-out to Lindell’s new social media site, roasting the CEO for his “spectacle” of a telethon, The Daily Beast reports.

“Thank you for joining us on what was, I have to admit, one of the least productive days that we’ve had here at our office in quite some time,” Kimmel began, telling his audience he is  “obsessed” with Lindell.

“You know, a lot of people said the CEO of a pillow company couldn’t successfully launch a major social media site—and those people were 100 percent correct.”

Kimmel told viewers he highly recommended they tune in. “It is quite a spectacle,” he said. “If you’re high, I recommend it. It’s like the Jerry Lewis telethon if Jerry was on a public access channel and crack.

“Phones are ringing, there are crank calls pouring in, the lights went out, he kept ranting and raving about the same things over and over again: Machines, vaccines, and me!” Kimmel exclaimed before sharing a montage of clips from Lindell’s event, all featuring the pillow salesman complaining about jokes the late night host made at his expense.