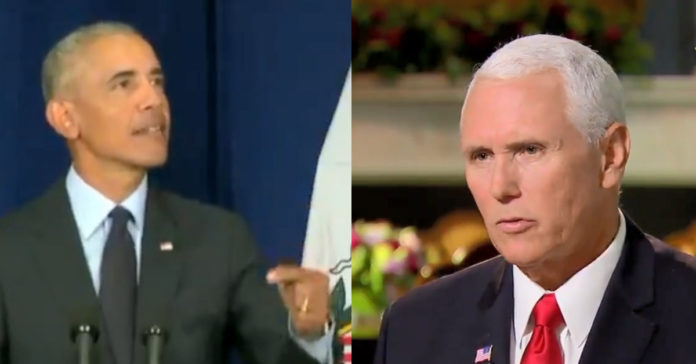 Mike Pence has had enough of Barack Obama trying to rewrite history. Obama was a disaster, as history will clearly remember him, but the media wants to push a false narrative – and Mike Pence is not having it.

As reported by Breitbart: Vice President Mike Pence had a message for former President Barack Obama at the Values Voter Summit Saturday: the American economy is booming because the Trump administration is rolling back Obama administration policies.

“It’s been two years of promises made and promises kept, and we’re just getting started,” Pence told the conference audience in Washington, DC. He cited more than four million jobs created since President Donald Trump took office, record low black and Hispanic unemployment, wages rising at the fastest pace in a decade, and the highest middle class income in recorded history.

Pence said this did not just happen, but, rather, it happened because the American people made a choice in 2016. He compared the Obama administration with Trump’s administration. He said the last administration stifled the country under red tape and declared war on American energy, whereas, “Under President Trump, the war on coal and American energy is over.”

The vice president said the last administration raised taxes while the Trump administration passed the largest tax cuts in American history. “That’s promises made and promises kept,” said Pence, who added that under Trump, they cut out the core of Obamacare: “The individual mandate is gone.”

He then remarked about former President Obama’s recent speeches taking credit for the American economic boom that has risen under President Trump and claiming it began under his administration. The crowd balked at the idea that Obama has claimed credit.

Vice President Pence then launched into what he said was a message for former President Obama:

President Obama, you presided over the weakest economic expansion since the Great Depression. When we took over this economy, it was growing by less than two percent, and now it’s growing by more than four percent. This economy isn’t booming because of your policies; it’s booming because we’ve been rolling back the failed policies of your administration since day one.

“America is back, and we’re just getting started,” declared Pence.

UGLY AMERICANS: The “NEW” Kathy Griffin. How the Vulgar Left is Destroying the Democratic Party.

BREAKING! This is REAL!! Julian Assange LEAKS info that Hillary will try to OUST Trump so Pence can take over. “Deep State” Intelligence Community...