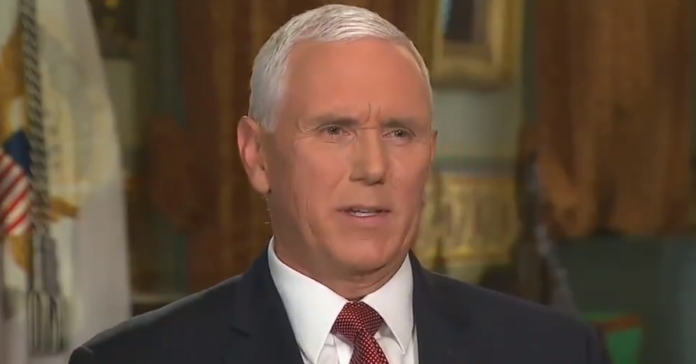 In 2015, Pence was diagnosed with an asymptomatic left bundle branch block. He disclosed this before campaigning with Trump in the historic 2016 election. His office said for the last two weeks Pence had symptoms associated with a slow heart rate so had the surgery.

“The routine surgery was successful, and he is expected to fully recover and return to normal activity in the coming days,” Pence’s office said. The surgery was performed at the Inova Fairfax Medical Campus in Falls Church, Va.

“I am grateful for the swift professionalism and care of the outstanding doctors, nurses and staff at Inova Heart and Vascular Institute, including Dr. Brett Atwater and Dr. Behnam Tehrani,” Pence said in a statement.

Pence just launched a new organization to promote the successful policies of the Trump admin and to fight Biden’s overreach.

Pence’s new organization issued a press release about the launch:

Former Vice President Mike Pence on Wednesday launched a new policy and advocacy organization to promote “pro-freedom policies of the last four years,” featuring an advisory board of nearly a dozen Trump-era alumni.

Pence’s organization, Advancing American Freedom, is said to be working to continue Trump administration policies that “created unprecedented prosperity at home and restored respect for America abroad,” while defending those policies “from liberal attacks and media distortions.” In announcing the group, Pence said it would “prevent the radical Left from enacting its policy agenda that would threaten America’s freedoms.”

“Advancing American Freedom plans to build on the success of the last four years by promoting traditional Conservative values and promoting the successful policies of the Trump Administration,” Pence said Wednesday.

“Conservatives will not stand idly by as the radical Left and the new administration attempt to threaten America’s standing as the greatest Nation in the world with their destructive policies,” he said.

“Under the leadership of President Trump and Vice President Pence, Americans experienced unprecedented prosperity. The policies that led to those accomplishments are now under attack by the radical Left and the Biden Administration, and the foundation of our Nation is under siege,” Advancing American Freedom Executive Director Paul Teller, a former chief of staff to Sen. Ted Cruz, said. “Advancing American Freedom will push back against the Left’s agenda and champion policies across the country that advance American liberties, American strength and security, and American prosperity.”

The organization is expected to engage in policy discussions and issue advocacy at both the state and federal level by proposing conservative policy solutions to the economic, foreign policy and constitutional issues that confront Americans today.

The organization is also expected to “oppose the expansion of government” under the Biden administration — which they say is pushing a “radical Left policy agenda from Washington, D.C., into communities across the country.”

Ex VP Mike Pence had surgery yesterday to have a pacemaker installed. pic.twitter.com/zvejfR7YXQ

Former Vice President Pence got a pacemaker yesterday, his office says, adding the surgery was successful.