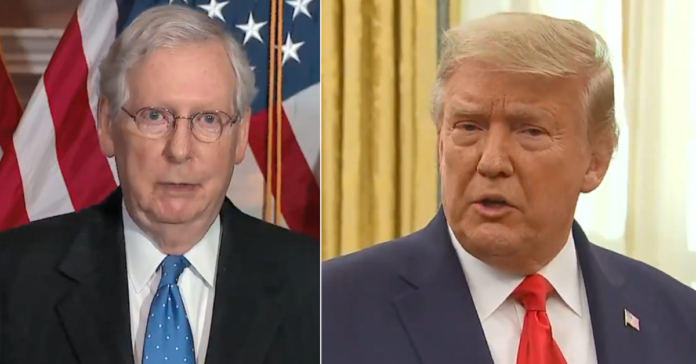 Mitch McConnell voted to acquit former President Donald Trump but then inexplicably took to the Senate floor after the trial and trashed Trump and up and down. Mitch even hinted Trump could be prosecuted for his actions.

It was an odd way to celebrate a trial win and Trump was not pleased. He issued a blistering response. “McConnell’s dedication to business as usual, status quo policies, together with his lack of political insight, wisdom, skill, and personality, has rapidly driven him from Majority Leader to Minority Leader, and it will only get worse,” Trump said.

“The Democrats and Chuck Schumer play McConnell like a fiddle, they never had it so good, and they want to keep it that way.”

Trump also said, “Mitch is a dour, sullen, and unsmiling political hack, and if Republican Senators are going to stay with him, they will not win again. He will never do what needs to be done, or what is right for our Country. Where necessary and appropriate, I will back primary rivals who espouse Making America Great Again and our policy of America First. We want brilliant, strong, thoughtful and compassionate leadership.”

So it was not surprising to see Mitch change his tune last night when he said on Fox News he would support Trump if he was the GOP nominee in 2024.

After Mitch McConnell said “there’s a lot to happen between now and ’24. I’ve got at least four members that I think are planning on running for president. Should be a wide open race.”

Bret Baier asked him: “If the President was the party’s nominee in 2024, would you support him?”

McConnell replied: “The nominee of the party? Absolutely.”

“My point is what happened in the past is not something relevant now, we’re moving forward. We’ve got a new administration,” he said.

“I don’t have any advice to give the former president about where he should speak or what we should say,” McConnell said about Trump’s speech at CPAC.

McConnell tells Fox’s @BretBaier he would support Donald Trump if he was the 2024 Republican nominee pic.twitter.com/BS14OyXZ41

After Mitch McConnell said a number of senators are likely to run in 2024, @BretBaier asked what he would do if Trump was the nominee: "If the President was the party's nominee [in 2024], would you support him?"

McConnell replied w/this: "The nominee of the party? Absolutely." pic.twitter.com/FZb9kXSiiZ