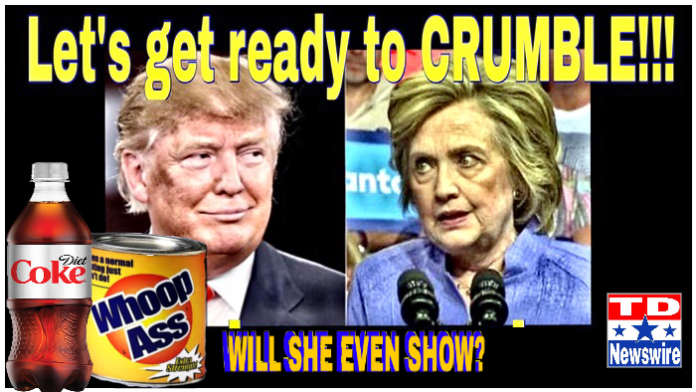 Five days and counting. The first of three presidential debates is set to be held Monday night September 26 at Hofstra University. There should be three people on the stage, candidates Donald Trump and Hillary Clinton as well as NBC moderator Lester Holt.
In the last several days questions have begun to come up as to whether Hillary will actually debate or whether she will be a no-show. In the last two days Clinton has canceled fundraisers in California and in North Carolina and stayed home to rest, presumably trying to get her strength back for the debate Monday night. During those same two days the crooked liberal media has begun to come out with multiple articles about Hillary still having “pneumonia” “How Hillary’s Pneumonia Has Left Her Campaign Ailing” (NY Daily News.)
This is a prime example of the dishonest liberal media working with the crooked Clinton campaign. This is what’s known as a “BACK DOOR” folks. A back door as in a legitimate “sounding” excuse if Hillary decides not to debate. There is a good chance Hillary will back out over the upcoming weekend. About a 25% chance in my humble opinion.  But make no mistake folks, if Hillary backs out they’ll SAY it’s because of pneumonia but it WILL NOT be because of pneumonia. 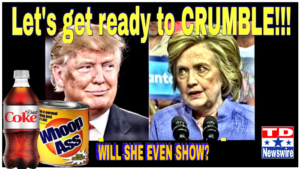 Think about this: if Hillary has to bow out of this one because of her “pneumonia” who wins, Hillary Clinton or Donald Trump? Hillary of course! HILLARY HAS VERY LITTLE TO WIN AND EVERYTHING IN THE WORLD TO LOSE BY PARTICIPATING IN MONDAY’S
DEBATE.

HILLARY HAS VERY LITTLE TO WIN AND EVERYTHING IN THE WORLD TO LOSE BY PARTICIPATING IN MONDAY’S
DEBATE. 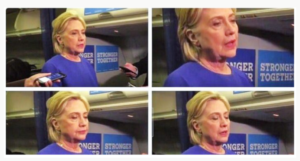 Several nights ago when Hillary spoke with the press about the (non) bombings she seemed really tired confused and drugged-up didn’t she?   She was, wasn’t she? Wasn’t she? Was she?  AH-HAAA!!!

Hillary Clinton is not like you and me. She thinks nothing about getting up on stage in front of 25 million people and lying over and over again. She thinks nothing of taking actions that will ruin peoples lives or even kill them. Let’s face it everybody lie every now and then. But when you and I lie we feel guilty, we get a little rumble in our stomach or maybe we can’t sleep the night before. None of that non-sociopathic nonsense affects Hillary. What she has to contend with is that for the first time she is going to have to answer to the American people in front of the American people the questions that the liberal media refuses to ask her.

So it’s not about conscience. She has none. What she’s asking herself is what is it going to look like to the voters when she answers these questions with her lies? Can she lie and lie and lie and still look good at the end of the night? That’s it. Bottom line.

The only chance she would have in a debate Monday night would be if Trump really lost his cool. But that is highly unlikely he Donald J. Trump is way past that. Donald J. Trump is presidential. I like to think of him as our not-yet-elected President of the United States. Shoot….. you may as well too. All we’ve got is Barack Obama (hehehe snicker snicker).
I am eagerly looking forward to this debate Monday and, assuming it happens, I anticipate Mr. Trump will mop the floor with her. Open a can-of-whoop-ass if you will. And I hope I’m wrong about the possibility of crooked Hillary backing out. I really really do. But if she does back out you know the reason why and remember where you heard it first.