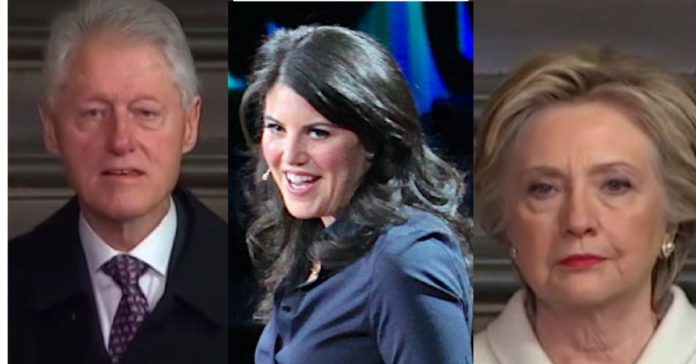 Monica Lewinsky just broke her silence on Bill Clinton’s new comments about the affair that rocked the nation.

Bill has been roundly criticized for what he said to NBC’s Craig Melvin. Melvin asked Clinton, “Do you feel like you owe her an apology?”

Clinton spat back “No, I do — I do not. I’ve never talked to her.” Bill kept talking and made it worse for himself and later tried to walk back the comments by saying he was provoked by Melvin.

With the Clinton’s there is always an excuse – “it depends on your definition of is.”

Monica has said earlier about Clinton:

“I now see how problematic it was that the two of us even got to a place where there was a question of consent,” Monica said. “Instead, the road that led there was littered with inappropriate abuse of authority, station, and privilege … Now, at 44, I’m beginning (just beginning) to consider the implications of the power differentials that were so vast between a president and a White House intern. I’m beginning to entertain the notion that in such a circumstance the idea of consent might well be rendered moot. There are even some people who feel my White House experiences don’t have a place in this movement, as what transpired between Bill Clinton and myself was not sexual assault, although we now recognize that it constituted a gross abuse of power.”

Correct. But after Bill said what he said, Monica felt it necessary to come forward again and show the Clinton’s how to act in public.

“Lewinsky took the high road in regards to the comments Clinton made about the affair. She tweeted on Monday that she is “grateful [sic] to the myriad people who have helped me evolve + gain perspective in the past 20 years,” and shared a link to a Vanity Fair article she wrote about her experience with Clinton.”

grateful to the myriad people who have helped me evolve + gain perspective in the past 20 years.

worth reposting this today from @VanityFair …https://t.co/u9Ta13Alz3

A lot more classy than Bill or Hillary don’t you think?

Hollywood, once the safe place for the Clinton machine, has turned on them too – leaving them friendless to waste away thinking of all that they have done to harm this great nation.

Bill Clinton. Here is the truth of it: a human life was altered & destroyed due to your selfishness. Because. You. Could. You not only wiped your semen on a young girl’s dress, you left a stain on society. You actually owe EVERYONE an apology, especially her. #MeToo pic.twitter.com/HWnsAmXjlR