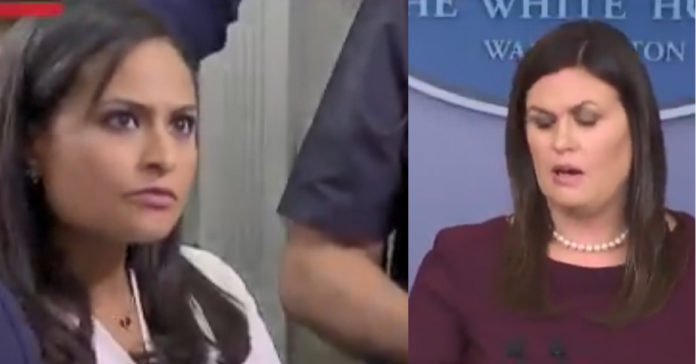 Kirsten Welker just asked Sarah a rather dumb question and Sarah just shut her down with a brilliant answer.

“Have you asked him directly if the President has ever used the N word? Can you stand at the podium and guarantee the American people that they will never hear a tape of Trump saying that word?” Welker asked.

If at any point we felt that the president is who is critics claim him to be we wouldn’t be here.

Obama in 8 years in office had only created 800,000 jobs for African Americans.

President Trump in the first year and a half has already tripled what Obama did in 8 years.”

But that wasn’t good enough so Welker rudely asked,

“Just to be clear you guarantee it?” Sarah silenced her with what she said next.

It wasn’t until he became a candidate for president that you started hearing these salacious accusations.

If you look at the actions and the policies enacted you can see the heart of who he is.”

.@kwelkernbc: "Can you stand at the podium and guarantee the American people they'll never hear Donald Trump utter 'the n word' on a recording, in any context?"

Sarah Sanders: "I can't guarantee anything… I can tell you I've never heard it." pic.twitter.com/rSDj4ctA5a