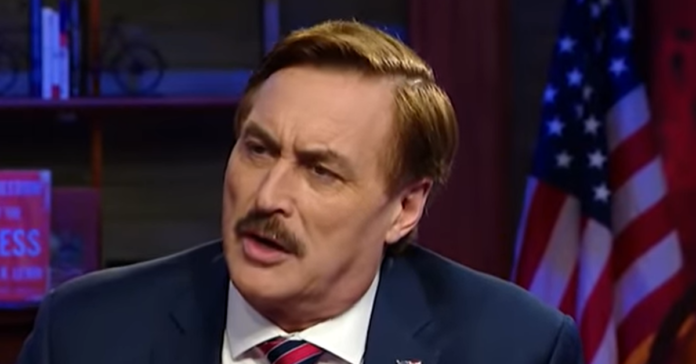 Lindell told Politico that he went to Nashville for the three-day conference on Tuesday because he was invited and showed a screenshot to prove it. But when he got there, and after collecting his credentials, he was told he was banned from attending any of the official RGA events.

“These events are for RGA members, and Mike Lindell is not currently an RGA member,” an RGA official said.

Lindell on Tuesday shared a screenshot of a calendar event headlined “RGA – Nashville Meeting” with the attachment “Nashville Agenda.pdf,” and said he had been invited to the event in the last month or two. He also shared the schedule of RGA events for Tuesday and Wednesday that had the word “CONFIDENTIAL” at the bottom.

Earlier on Tuesday, Lindell had gone on Steve Bannon’s radio show and promised to confront Georgia Gov. Brian Kemp and Arizona Gov. Doug Ducey, RGA’s chair, about the election and allegations of fraud in their states.

Hundreds of people are attending this week’s conference in Nashville, the organization’s first widely attended event to be held since the start of the Covid pandemic more than a year ago.

…Lindell has attended previous meetings of the RGA, including the winter 2020 meeting, where a few Republican governors encouraged him to run for governor of Minnesota. Former Virginia Gov. Bob McDonnell brought him to that event, but Lindell was not with McDonnell at the hotel on Tuesday. Trump has also encouraged Lindell to run.

Lindell got some good news earlier in the week when a judge ruled in his favor.

A district judge in Washington, DC, has ruled that MyPillow CEO Mike Lindell doesn’t have to publicly reveal his address in court documents related to his legal battle against Dominion Voting Systems, after lawyers for Lindell said it would put him at risk of death threats.

In documents filed May 14, legal representatives for Lindell said MyPillow had reported at least seven people to the Chaska, Minnesota, police, claiming the people had “directly threatened Mr. Lindell’s life or physical safety.”

This included a person who Jeremiah Pilon, the deputy general counsel for MyPillow, said repeatedly ringed MyPillow’s call center and detailed a plan to kidnap and decapitate Lindell.