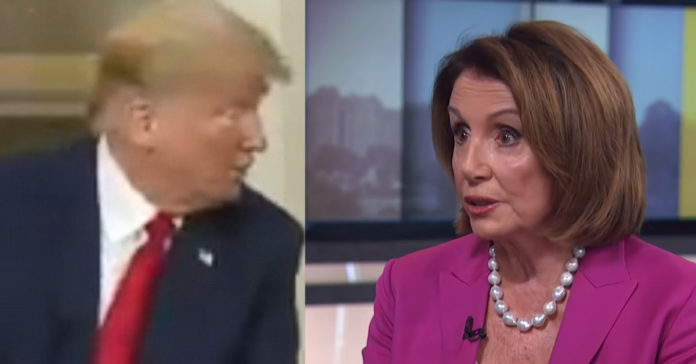 Trump’s feud with the media is one of the most misunderstood parts of his presidency. It turns the left into a bunch of weeping hysterics proving that they never actually listen to what Trump says.

Trump calls the media fake news because he claims they have a slant – they create and push certain narratives with their reporting. That they have an agenda.

A few facts left on the cutting room floor… quoting experts paid to shill without revealing the tangled webs behind the opinions..there are many tricks they use to push the angle they want.

When looked at like that, in the proper context, Trump is right. And that is what Pelosi just did.

Whether she meant to or not it doesn’t matter, she agreed that he is right in that the media has a narrative and they push it.

House Minority Leader Nancy Pelosi on Sunday accused NBC of trying to “undermine” her prospects of becoming speaker again if Democrats take back the House in November.

The California Democrat attacked the network during MSNBC’s “AM Joy” after NBC published a report citing 51 Democrats who said they would not support Mrs. Pelosi for speaker.

Guest host Jonathan Capehart asked Mrs. Pelosi whether she would be willing to “give up the gavel and give it to the new generation of leaders” if Democrats take back the majority in the midterm elections.

“Well first of all,” Mrs. Pelosi answered, “I know NBC has been on a jag of this as one of their priorities to undermine my prospects as speaker.

“But putting that aside, I have not asked one person for a vote, I haven’t asked a candidate or an incumbent for a vote,” she said. “What’s important, and I know better than anybody how important it is, [is] for us to win this election, because I see up close and personal what the Republicans and this president are doing.”

Mrs. Pelosi went on to claim that the attacks on her have been led by Republicans because they’re “afraid” of her, partly because she’s a woman.

“I do not think our opponents should select the leaders of our party. The Republicans are spending millions, tens of millions of dollars against me because they’re afraid of me,” Mrs. Pelosi said. “Because I out-raise them in the political arena, because I outsmart them at the negotiating table, and because I’m a woman who is going to be a seat at that table.

“If Hillary Clinton had won and sat at the head of that table, it would be different, but I’m not yielding that,” she added. “Now I do believe that none of us is indispensable, but I think I’m the best person for the job.”

Mr. Capehart asked Mrs. Pelosi if she could foresee a situation in which she would not seek the speakership.

“That’s the least important question of all, with all due respect,” she replied. “It’s an NBC question, I know, because that’s a jag you all are on.”