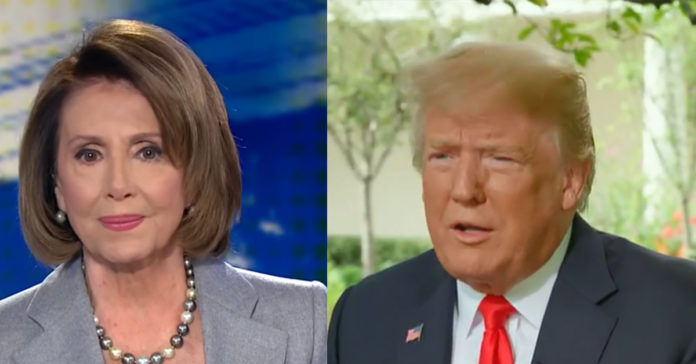 Nancy Pelosi just can’t help from stepping in it on an almost daily basis. She is the perfect foil to President Trump and the GOP and expect the midterms to be about her versus Trump.

Pelosi sat down for an interview to try to stop an uprising against her by the rank and file Democrats, who are not that into her becoming speaker again if the Democrats take back the House, and embarrassed herself instead.

As usual, she hurt not helped her cause with an outlandish statement devoid of reality.

House Minority Leader Nancy Pelosi (D., Calif.) said on Thursday that she has a following in the country that’s unsurpassed by anyone, except those running for president.

“I have a following in the country that’s unsurpassed by anybody, unless they’re running for president,” Pelosi said.

Pelosi made the comments in an interview with the Associated Press. The 78-year-old Democrat was responding to a question about her leadership being in jeopardy. NBC News released a report that showed over 50 Democrats, including nine incumbent lawmakers, have publicly stated they would oppose Pelosi to be speaker of the House if Democrats retake control the House of Representatives.

“This is not anything to make a big fuss over, it’s politics,” Pelosi said.

The Washington Free Beacon identified 22 Democrats from NBC’s list who have accepted campaign contributions connected to Pelosi but have either said they do not support her for speaker or dodged questions about the matter. Those Democrats accepted cash to their campaign committees from PAC to the Future (Pelosi’s leadership PAC), Nancy Pelosi for Congress (her campaign committee), or both.

Other Democratic leaders have noticed the swelling support to replace Pelosi as speaker. Third-ranking House Democrat James Clyburn (S.C.) said he would run for speaker if Pelosi is unable to secure enough votes of support.

Rep. Seth Moulton (D., Mass.), a longtime Pelosi critic, called on her to resign now so Republicans couldn’t use her against vulnerable Democrats in elections.

“It’s far better for her to graciously step down before the election, so that Republicans can’t use that attack against Democrats, than to wait until after the election,” Moulton said.