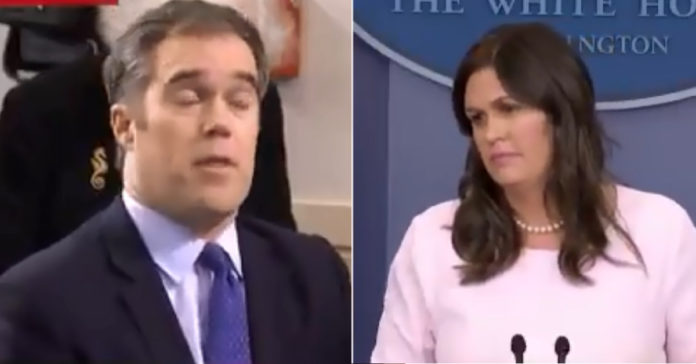 Peter Alexander is just another NBC hack reporter. Nothing new there but his rudeness was today as he pressed and pressed Sarah Sanders today regarding constitutional norms and the power of the president of which he knows little.

“Does The President believe he is above the law?”

“Certainly not.” said Sarah, before adding, “The president hasn’t done anything wrong.”

Yes, Peter, that is exactly what the constitution says – it does not limit the pardon power so Trump can do what he wants.

He is not above the law because Congress has the power to impeach the President.

So Trump can use the pardon power as he sees fit and Congress impeach him if they don’t like it. That is how our constitution works.

“Certainly, the constitution lays out the law… and once again the president hasn’t done anything wrong and we feel confident on that front.”

Peter wouldn’t take yes for an answer and kept pushing…”does the President believe he is above the law.”

He got the answer he wanted but still wasn’t satisfied and said: “can I ask another question.”

“No one is above the law and President Trump hasn’t done anything wrong,” Sarah said again before adding “I’m gonna move” on as the hapless Peter Alexander whimpered away.

WATCH: @PeterAlexander challenges the White House on whether President Trump believes he is above the law. pic.twitter.com/0i2SfMOJJ6