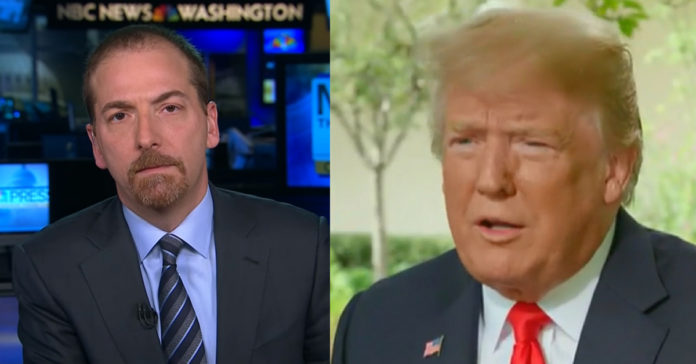 The media will stop at nothing from making Trump into a monster. Oh, they are so very clever with how they do it – nothing obvious, just hints and whiffs of an anti-Trump narrative in every story they air.

They rarely give themselves away so when they get caught out in the open it is noteworthy. And NBC just got busted.

NBC News did two polls last week on President Donald Trump’s approval rating after his numbers in the first poll registered highly enough that it thought viewers would be “skeptical” of the results.

“Meet The Press” host Chuck Todd discussed the polls on Sunday, following one of the most tumultuous weeks yet for the Trump White House. Former Trump lawyer and fixer Michael Cohen pleaded guilty to an array of charges and implicated his former boss in a hush payment scheme that may have violated campaign finance laws.

In addition, his former campaign chairman Paul Manafort was convicted on eight counts in a tax fraud case and faces up to 80 years in prison.

“The two stories have many asking whether this was more than even President Trump’s supporters could bear,” Todd said, before saying the answer so far appears to be “no.”

The first NBC News/Wall Street Journal poll was taken Aug. 18 through Aug. 22, mostly before the news of the convictions hit the airwaves, and showed Trump with an all-time high of 46 percent approval—and 51 percent disapproval—in that particular survey. The number was a result of the rock-solid support Trump has among Republicans, at more than 90 percent.

Todd said NBC elected to conduct a second poll from Wednesday through Saturday “because we knew some of you might be skeptical of the results.” However, the numbers barely budged, with Trump shifting to 44 percent approval and 52 percent disapproval, but within the margin of error in its difference from the first survey.

“Still, President Trump’s strength in the face of a nightmare news week demonstrates that his voters remain far more loyal than his close associates do, some of whom turned on him this week,” he said.

After Shameless Reporter Blames Trump for School Shootings, Sarah UNLOADS Like NEVER BEFORE.