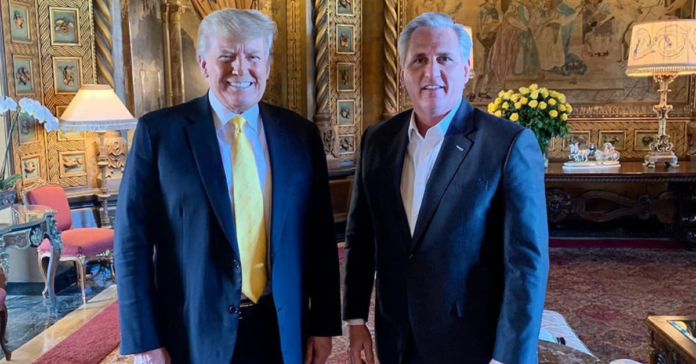 The establishment wing of the  Republican Party just got some very bad news indeed from a new USA Today poll.

Support for Trump is strong with nearly 50% of Republicans saying they would leave the GOP and join a new party with Trump should the former president start one.

This comes as there is a very public battle over the future of the Republican Party that can no longer be ignored by the GOP leaders.

According to Suffolk University/USA TODAY poll, 46% of Republicans would join a Trump Party and leave the GOP in the rearview mirror.

“We feel like Republicans don’t fight enough for us, and we all see Donald Trump fighting for us as hard as he can, every single day,” Brandon Keidl, 27, told pollsters.

“But then you have establishment Republicans who just agree with establishment Democrats and everything, and they don’t ever push back.”

Half of those polled say the GOP should become “more loyal to Trump,” even at the cost of losing support among establishment Republicans.

One in five, 19%, say the party should become less loyal to Trump and more aligned with establishment Republicans.

The survey of 1,000 Trump voters, identified from 2020 polls, was taken by landline and cellphone last Monday through Friday. The margin of error is plus or minus 3.1 percentage points.

“I think he’s probably exhausted,” says Peter St. Ong, 47, an independent voter from Berlin, New Hampshire. Trump might decide not to run again, he says, then reconsiders: “He seems to be more or less addicted to being the center of conversation, so I would honestly be pretty shocked” if he didn’t run again in 2024.