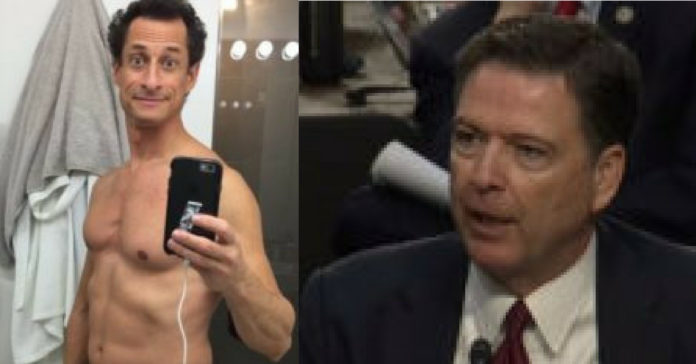 The plot thickens. A stunning new report is sending shockwaves through the swamp and you better sit down for this one.

Now we all know there were some serious shenanigans during the 2016 campaign – from both political campaigns and even the FBI joined in to create chaos.

We all expect and want our justice system to get to the bottom of it no matter who is implicated, but more importantly, we demand equal treatment.

A damning report by RealClearInvestigations’ Paul Sperry presents compelling evidence indicating that former FBI Director James Comey prematurely closed the investigation into Hillary Clinton based on political motivations and lied to the American people when he insisted days before the 2016 election that his agency had “reviewed all of the communications” found on the laptop of Clinton aide Huma Abedin and her husband Anthony Weiner.

Sperry notes that many wondered aloud at the time how the FBI could have possibly reviewed hundreds of thousands of emails in a matter of weeks. It turns out, Sperry explains, that they simply didn’t. In fact, evidence suggests they didn’t even come close, despite Comey’s assurances that they’d fully reviewed the communications:

Comey later told Congress that “thanks to the wizardry of our technology,” the FBI was able to eliminate the vast majority of messages as “duplicates” of emails they’d previously seen. Tireless agents, he claimed, then worked “night after night after night” to scrutinize the remaining material.

But virtually none of his account was true, a growing body of evidence reveals.

In fact, a technical glitch prevented FBI technicians from accurately comparing the new emails with the old emails. Only 3,077 of the 694,000 emails were directly reviewed for classified or incriminating information. Three FBI officials completed that work in a single 12-hour spurt the day before Comey again cleared Clinton of criminal charges.

Sperry points out that even that “extremely narrow” review of just a small fraction of the emails found that classified information was being either sent or received via Clinton’s unauthorized, unsecured private server.

“Contradicting Comey’s testimony, this included highly sensitive information dealing with Israel and the U.S.-designated terrorist group Hamas,” Sperry reports. “The former secretary of state, however, was never confronted with the sensitive new information and it was never analyzed for damage to national security.”

And Comey’s FBI allegedly never bothered to refer the matter to proper U.S. intelligence agencies, as required by federal law:

Even though the unique classified material was improperly stored and transmitted on an unsecured device, the FBI did not refer the matter to U.S. intelligence agencies to determine if national security had been compromised, as required under a federally mandated “damage assessment” directive.

The newly discovered classified material “was never previously sent out to the relevant original classification authorities for security review,” the official, who spoke to RealClearInvestigations on the condition of anonymity, said.

“There was no real investigation and no real search,” said FBI veteran Michael Biasello. “It was all just show — eyewash — to make it look like there was an investigation before the election.”