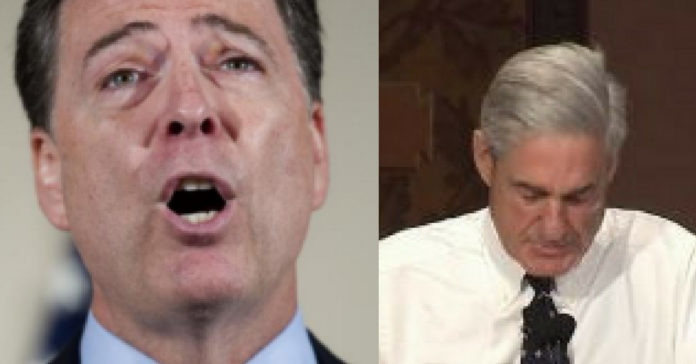 The plot thickens and while we know this stuff happens in the swamp all the time, that does not make it right.

In fact, the revolving door in the swamp is probably the biggest problem we face as a nation because it is from those shady relationships all the lobbying and money flows.

All the scratch my back I’ll scratch your deals that cost the American people a fortune while a certain few line their pockets.

That fact that this stuff is 100% legal, in most cases, actually makes it so much worse.

Bruner and Schweizer examined what they described as a “revolving door” of “cronyism” within the federal government’s national security and intelligence apparatuses, focusing on the monetization of security clearances held by former administration officials, such as John Brennan and James Clapper.

Bruner noted the growth of Comey’s net worth between 2003 and 2009, after Comey left the Department of Justice to join Lockheed Martin as senior vice president and lead counsel.

“It doesn’t really make much sense why [Lockheed Martin] would pay [James Comey] upwards of six million dollars in a single year,” assessed Bruner. “But one reason — aside from his security clearance — is that his buddy Robert Mueller is running the FBI. They begin passing 100-million-dollar-plus contracts to Lockheed Martin.”

Bruner continued, “One of these contracts was actually worth a billion dollars, and it was protested formally by the other bidder: IBM. … The contracts flowed from Robert Mueller’s FBI to James Comey’s private sector employer, Lockheed Martin, and James Comey made many millions over a short period of time.”

Bruner described Comey as “one of the prime examples of this kind of cashing in on government contacts.”

“We followed the money and realized that James Comey made well over ten million dollars from when he left the public sector in 2005 and by the time he returned to serve as FBI director [in 2009],” said Bruner. “He even made over six million dollars in a single year at the top government contracting corporation, Lockheed Martin; they get over $50 billion a year in government contracts.”

Bruner said, “[Paris Dennard] was absolutely right, and everybody knows that top-level intelligence folks leave the public sector and go cash in on their knowledge, experience, [and] security clearances. That’s one of the main reasons Brennan is crying so loudly–because he can’t work at a lot of these contractors without a security clearance.”

Schweizer also explained the value of security clearances held by former government officials: “In the exchange [between Paris Dennard and Phil Mudd], Mr. Mudd is being wholly disingenuous–because what he essentially said was, ‘I, personally, don’t have contracts.’ He may or may not. He may be entirely honest about that, but he knows darn well that his colleagues are neck-deep in these kinds of consulting arrangements.”

Schweizer added, “Consulting firms … all have large amounts of projects in management positions and subcontracting that they engage in, and if you want any of those … you have to have a security clearance.”

Governmental domains of national security and intelligence are vulnerable to “cronyism,” said Schweizer: “[They are] not immune to the exact same forces of cronyism and self-enrichment that we see anywhere else in government. It’s like the executive at Health and Human Services who does favors for the pharmaceutical industry and then goes and works for big pharma. The same thing happens in this space.”

Schweizer continued, “What makes [a top-level security clearance] so valuable for a guy like Brennan is he can be read into all of it, and he has access to all of it. Mark my words … if he was not doing contracting right now, he would be looking to do contracting. That’s no longer available to him [because] he has had his security clearance lost [and] cannot have access to any of that material now.”