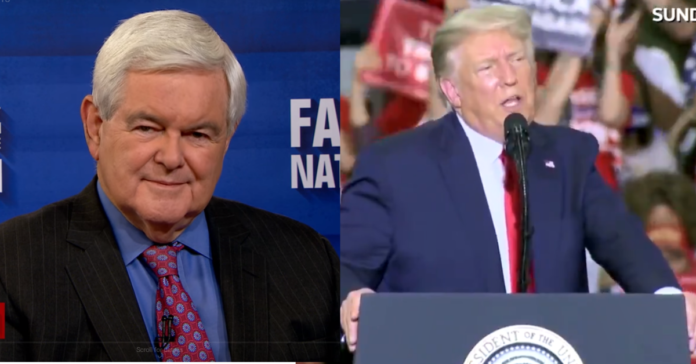 Newt Gingrich just made a prediction about the election that the media will not like. He said the left is going to be shocked by a Trump victory.

He is predicting Trump will get 326 electoral votes on his way to victory.

“He has a better likelihood than he did at this stage in 2016 when he was clearly behind and closing rapidly,” Gingrich said.

“The people I trust the most, the pollsters that have been the most accurate over the last 5 or 6 years who seem to understand the dynamics of the age of Trump.”

“I saw today the first electoral college map that made sense to me and it showed Trump at 326 electoral votes plus,” Gingrich said. “I think that is probably about right. I think the left is going to be terribly shocked.”

“I actually think, Sean, it comes down to something which is psychological, not ideological,” Gingrich added.

“In the end, as you watched these 2 candidates campaigning, I think it’s coming down to sort of a bunny rabbit hiding in a basement protected by the news media and a bear who is wandering around on the stage courageously without fear.”

“If you think the world is dangerous, whether the dangers are riots in Philadelphia or the dangers are the Chinese communists, you probably want a bear that is strong enough to defend you and not a bunny rabbit that has to be protected by the news media,” Newt said.

“I think every day that Biden hides and Trump goes out and campaigns, the psychological message being driven to the American people is really deeper than just ideology or partisanship,” Gingrich told Hannity.

“It says one guy has the guts, the willingness, the toughness to actually be out here, taking on things including Covid.”

“The other guy is hiding, frightened, hoping the news media will save him because he can’t possibly save himself.”

“And I think that sinks in,” he added.

“And I think that’s why you are seeing in virtually every poll I trust we’re seeing a steady drift towards Trump and away from the undecided and away from sort of leaning towards Biden but not sold.”

“My personal bet is it will lead to a surprising majority for Trump,” Gingrich said.