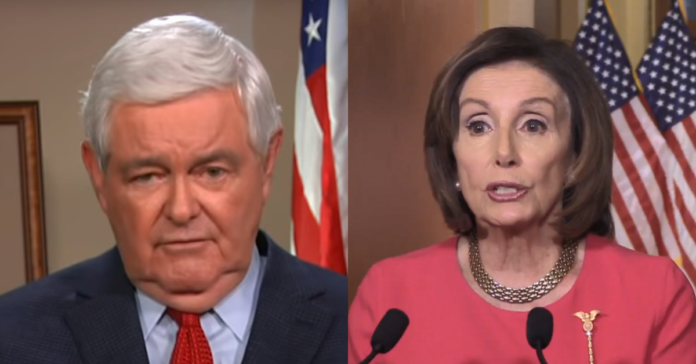 Newt Gingrich went on Fox News to speak to Laura Ingraham and the former Speaker of the House held nothing back.

He ripped Nancy Pelosi and Kamala Harris and Gavin Newsom saying they lived in a fantasy land as California gets worse and worse.

INGRAHAM:  Newt, I was clutching my side, I was laughing so hard. She’s not long for the Speaker’s world. I think this is a sign that even if they hold the House, I’m not sure Nancy is going to be Speaker of the House in the new term.

GINGRICH:  Sure, she wouldn’t. It’s about raw power. Look, Pelosi is a person who could, with no sense of irony, be standing in front of a $24,000 refrigerator eating $12 a pint ice cream and expressing her concern for poor Americans. She has no sense of irony.

She can live in a protected enclave and think it’s OK to defund the police and not see any contradiction in the size of her security patrol and the fact that she wants to leave average citizens without any police.

For a city that can’t collect human feces off the street, that is an extraordinary level of political power that has accrued to a city which is failing. And so I think they just live in a fantasy land. But they really live there.

INGRAHAM:  I’m not going to play another soundbite from that exchange, because I think we get it now.

But I do, Newt, want to ask you about the importance of Republicans trying to take back the House of Representatives.

You came along in 1994 and changed the world, the first time the Republicans had the House in several decades. You were able to do it with a midterm election. It’s not out of the realm of possibility here, and I don’t think people should give up on that.

GINGRICH:  No. In fact I think the fact is that if Trump continues to campaign as well as he did tonight in Pennsylvania, and continues to make the case on the big issues, and gets off all the minor stuff, I think that he can beat Biden by a big margin, and I think in the process we’ll take back the House and more than keep the Senate, maybe increase the Senate.

The key for the Trump campaign, frankly, is to get on these big issues, such as the Biden depression versus the Trump recovery, and stay on them and not get down into the weeds, and not get drawn off onto things.

The news media works every day to get Trump to say something that doesn’t get his main point across so they can avoid covering how bad Biden is, and Trump all too often plays into that. He needs to focus on the big choices in which case three weeks from now we’re going to have an astonishing election.

INGRAHAM:  Newt, I could not think of anyone better to have on tonight.

Thank you so much for joining us. Great to see you.