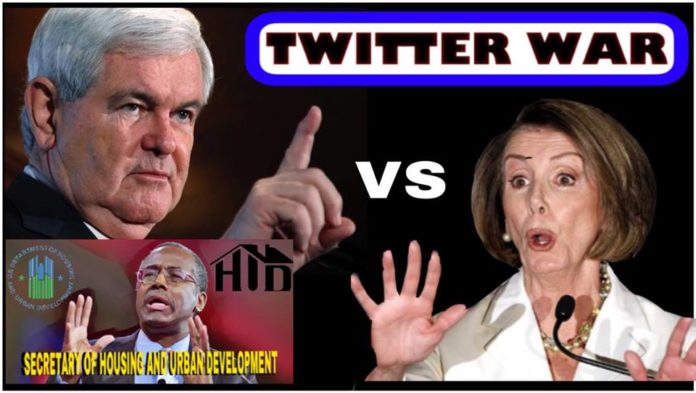 This morning President-elect Trump announced that he has nominated Dr. Ben Carson to be the new Secretary of Housing and Urban Development (HUD).  Dr, Carson, a Trump supporters’ favorite is a retired neurosurgeon and a former Trump rival for the presidency who became  a key supporter.

One of the very few people who have been as close to and loyal to the Trump campaign as Dr. Carson is former Speaker of the House Newt Gingrich.  Shortly after the announcement, Mr. Gingrich put out the following tweet:

Newt Gingrich- Former US Speaker of the House

Dr Ben Carson is a brilliant man with a great work ethic and a deep desire to help his fellow Americans. an outstanding choice for Trump

Several hours after Newt Gingrich released his tweet Nancy Pelosi came out with her own tweet on the subject. The minority leader elected to take the low road and release a really ugly (imagine that) statement.  Here is Nancy Pelosi’s tweet:

Our country deserves a HUD Secretary with the relevant experience. Dr. Carson is a disturbingly unqualified choice. https://t.co/BvlXlJw0xq pic.twitter.com/gCYaiIfmj3

Other than pointing out that Dr. Carson is one of the most brilliant minds in this country who was actually running for President of the United States and that Barack Obama, based on experience, was much less qualified to be president than Dr. Carson is to run HUD we will reserve our commentary.  We would like to know what you, our readers, think about this subject.

Please take our TD Newswire Poll below by selecting one of these two options:

I agree with Newt Gingrich’s tweet regarding Dr. Ben Carson

I agree with Nancy Pelosi’s tweet regarding Dr. Ben Carson

We will post the results on Friday.  Thank you for reading and voting.P Please SHARE this with all you friends!  Thank you!