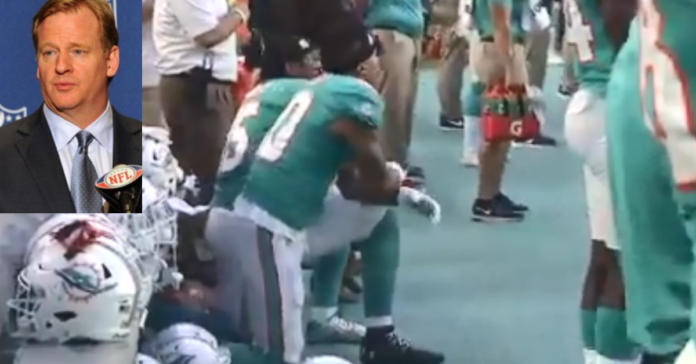 The bad news keeps coming for the National Football League as the public does the worst thing imaginable for a media conglomerate – ignores it.

Television ratings continue to sink like a stone and while sports across the board are down the modern NFL is a TV first creation.

If the ratings tank everything changes. There is some good news for the league – it seems Tom Brady is still a big draw getting 18.24 million viewers for Sunday’s Buccaneers game.

“Ratings have dropped for all 11 NFL games on NBC this season, with viewership down for all-but-one,” SMW reported.

Meanwhile, ESPN’s Monday Night Football averaged 11.45 million viewers and was the series’ second-best Week 10 audience since 2015, it was still down 28 percent over last season.

The final round of The Masters, which was delayed seven months due to the pandemic, drew 5.59 million viewers on CBS Sunday afternoon — a 48 percent drop from last year’s closing round (10.81 million) and the smallest audience for the final round since at least 1995 (the earliest year for which total viewer numbers are available).

The Masters broadcast meant CBS aired its NFL games in the 4 p.m. ET window. Fox, with the early afternoon to itself, recorded big year to year gains for its 1 p.m. slate:

It averaged 18.24 million viewers for regional NFL coverage, a 73 percent jump over the same week of the NFL season last year.