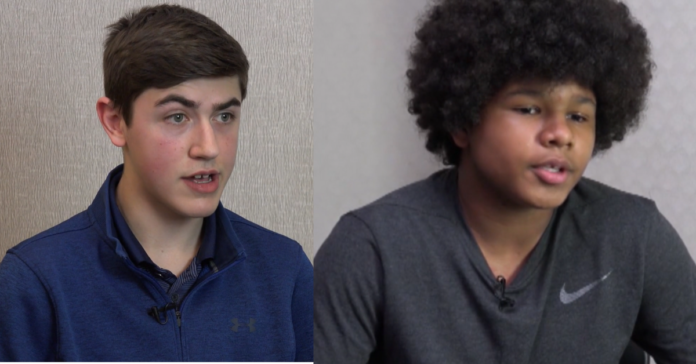 Nick Sandmann settles his scores with the media in a documentary and he was not alone. The entire Covington community was damaged by the media hysteria and they are speaking out and some of the stories are heartbreaking.

The movie shows mothers crying over death threats their kids got just as well as an interview with an African-American kid who was verbally attacked by members of the Hebrew Israelites just before the infamous scene at the Lincoln Memorial.

As to how the filmmakers got an interview with Nick: “We had actually shot and edited the entire doc without Nick and his Dad because we weren’t sure they’d be able to talk due to their lawsuits against media outlets. Once they scored their first settlement and we got the okay, we were blown away by Nick’s class and eloquence,” Steve Oldfield said.

The filmmakers talked with Julie Irwin-Zimmerman of The Atlantic, and Joe Starrs, who is the director of the Journalism Program at The Fund For American Studies in Washington.

Oldfield was a fellow in the program’s first class at Georgetown University back in 1985. He graduated from Northwestern University’s Medill School of Journalism and from Covington Latin, a school that hasn’t historically enjoyed a warm relationship with Covington Catholic.

“If you’d have told me as a kid that I’d be devoting several years of my life to defending Cov Cath, I never would have believed it,” Oldfield said. “But I think they have a really great school and were treated unfairly on so many levels.”

Oldfield funded the documentary entirely on his own with Anderson. They knew they had done the right thing when finally interviewing the Sandmanns after trying for more than a year.

“We had actually shot and edited the entire doc without Nick and his Dad because we weren’t sure they’d be able to talk due to their lawsuits against media outlets,” Oldfield said. “Once they scored their first settlement and we got the okay, we were blown away by Nick’s class and eloquence.”

They added the interviews throughout the documentary.

In addition to the Sandmanns, the film features Cov Cath graduate Michael Hodge and his mother Pamela. Michael was first identified as the boy in the viral video by the online mob. He and his family weren’t even in Washington, D.C. for the March for Life as they were hosting a family wedding that weekend in Northern Kentucky.

“They were trying to celebrate and kept getting thousands of angry and threatening messages on Twitter,” Oldfield said. “We thought it was important to include their story to show it wasn’t just the Sandmanns who suffered.”

Filmmakers also scored an exclusive with an African-American boy who was verbally attacked by members of the Hebrew Israelites just before the encounter at the Lincoln Memorial. The Cov Cath freshman was so traumatized by the event, he dropped out of school for the rest of 2019 and then transferred to a public school.

“He’s a really great kid with awesome parents – they showed another side that never made it into the media’s coverage,” Oldfield said.

Along with some other Covington Catholic students, parents and journalists, Anderson wanted to include commentators on social media from around the world. He watched hundreds of hours of “vloggers” to craft a diverse conversation in the documentary.

“I found people from as far away as Australia and Malaysia talking about Nick Sandmann and Covington Catholic,” Anderson said. “Their comments run the gamut from insightful and profound to downright funny,” he said.

Check out “Rush to Judgement,” here.