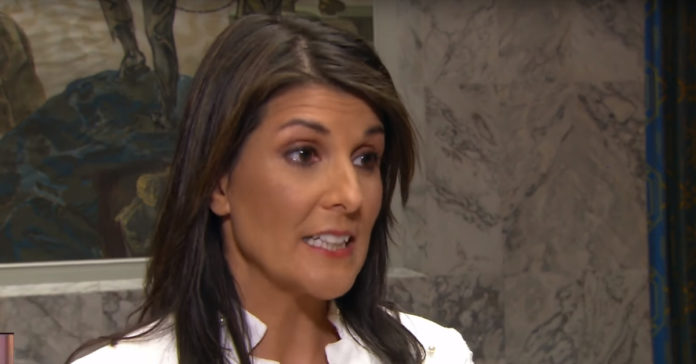 Nikki Haley has had enough of the fake friends masquerading as allies to the United States of America.

And she is doing something about it.

As reported by The Daily Wire: Appearing with Bret Baier on Fox News’ Special Report on Wednesday, U.N. Ambassador Nikki Haley spoke of the Trump Administration’s foreign policy perspective in characteristically blunt terms, asserting, “We are no longer going to give money to people who are against the U.S., or say, ‘Death to America,’ or do anything that would be anti-U.S.”

Haley began by speaking of the sea-change in the attitude around the world engendered by the foreign policy initiatives of the president:

I think he’s actually done a lot on foreign policy but in different ways. If you look at what he’s done with North Korea, it’s really led the international community to isolate North Korea to where they decide, they realize they have a decision to make. He led on the fact that he pulled out of the Iran deal. He’s forcing the entire world to admit the fact that Iran was not behaving properly. He’s led in Syria to make sure that chemical weapons are not being used and he’s warned against them being used again.

Haley then turned to Trump’s attitude toward South American countries with an anti-American bent, asserting, “I think that if you look in the Western Hemisphere, which we’ve spent the last two weeks focused on, whether it is Venezuela or Nicaragua, the messages are being sent that we are not going to support dictators.”

Then Haley extrapolated from South America to the rest of the world:

.@nikkihaley on @POTUS' foreign policy: "We are no longer going to give money to people who are against the U.S." #SpecialReport pic.twitter.com/yY1SZQUuAa