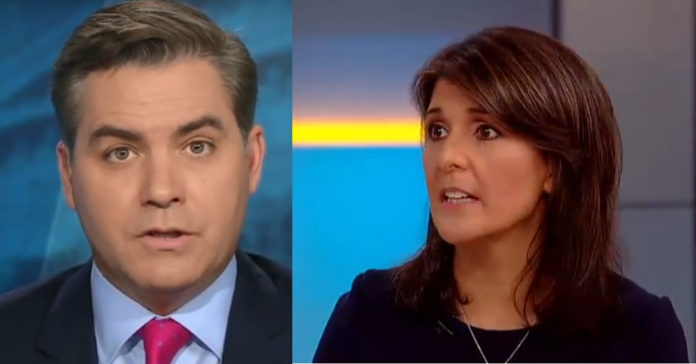 The media works overtime to trash President Trump. Look, Trump knows how the game is played and he knows he sells especially if it is a hit piece.

Look at all the books he is selling for disloyal turncoats. They should really give him a cut don’t you think?

The fact is Trump is by far the most open and honest politician we have ever had. That is a fact. You may not like what he says but for the first time, we have a politician that says the same things in public and in private.

That is rare. The truth is Trump is from the school of positive thinking and knows confidence is contagious. And the fact is he got some groans from the crowd for saying we are doing great but that is jealousy and then he turned the tables and made a funny joke that got massive applause.

People like Trump for his honesty and his humor and as much as the media wants to make him a monster it simply won’t work.

United Nations Ambassador Nikki Haley said the media had it “so wrong” in its portrayal of some laughter during President Donald Trump’s speech to the U.N. General Assembly as a sign of global disrespect.

On the Trump-friendly program “Fox & Friends” on Wednesday, co-host Ainsley Earhardt effusively praised Haley’s leadership at the U.N. and asked her to explain the moment that went viral and was widely interpreted as negative for Trump.

“I know you were in the room when the laugh happened,” Earhardt said. “Sometimes the media can portray it as one thing, and it’s not that at all. What was it like, and why that reaction?”

“The media has got this so wrong,” Haley said. “I deal with these leaders every single day. I know exactly how they think. Do they love America? No. Do they respect America? Now they do. When he said that, they love how honest he is, and it’s not diplomatic, and they find it funny. When he goes and he is very truthful, they kind of were taken aback by it.”

Haley went on to say other leaders were falling over themselves to take photos with him and appreciated his honesty.

“There’s a respect there,” she said. “I saw that the media was trying to make it something disrespectful. That’s not what it was. They love to be with him.”

Near the outset of Trump’s remarks on Tuesday, he said his administration had accomplished more than nearly any other in nation’s history, leading to some light chuckles from the crowd. Trump ad-libbed “so true” and quipped he hadn’t expected that reaction, leading to an outburst of laughter and applause.

Mainstream press jumped on the moment and nearly unanimously declared it to be an embarrassing moment for Trump and the country.

CNN’s Jim Acosta called it the most “notable” part of the speech and opined that Trump would have liked to have that moment back. CNN’s Chris Cillizza wrote, “The gathered world leaders — or at least some of them — were laughing at Trump’s contention that he had done more in two years than any previous American administration ever.”