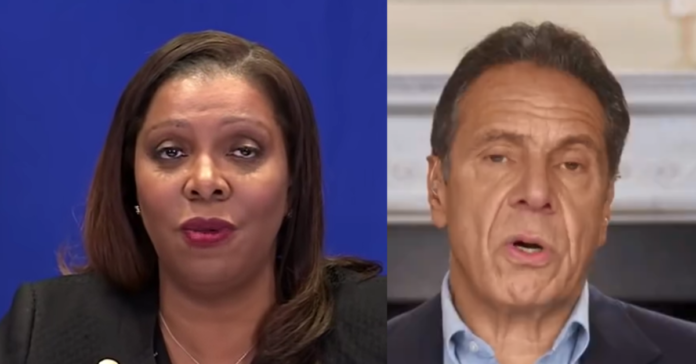 New York Attorney General Letitia James has officially opened a probe into soon to ex-New York Governor Andrew Cuomo. She was waiting on a referral letter from Cuomo to authorize the probe, and you know if the media spotlight was not on him he would have found a way to not send it. But he sent it and the probe is in the hands of the no-nonsense and politically ambitious AG James.

“Today, the executive chamber transmitted a referral letter to our office, providing us the authority to move forward with an independent investigation into allegations of sexual harassment claims made against Governor Cuomo,” James said in a statement.

“This is not a responsibility we take lightly as allegations of sexual harassment should always be taken seriously. As the letter states, at the close of the review, the findings will be disclosed in a public report.”

Here is the letter Cuomo had to send authorizing an investigation into himself.

The Governor is hereby making a referral pursuant to Executive Law Section §63 (8) for you to select an independent law firm to conduct an inquiry into allegations of and circumstances surrounding sexual harassment claims made against the Governor.

Nothing in this letter is intended to constrain or limit any of the powers inherent in Executive Law §63 (8). Due to the nature of this review, however, the weekly reports contemplated by Executive Law §63 (8) will not be approved by or transmitted to the Executive. At the close of the review, the findings will be disclosed in a public report.

All New York State employees have been directed to cooperate fully with this review. I will serve as point of contact for any witness interviews or document production for the Executive Chamber and will connect you with appropriate counsel in any other agency or entity for any documents or witnesses necessary for the review.

Cuomo is lawyering up in preparation for what comes next. From The Daily Caller:

Elkan Abramowitz will represent the governor and his closest aides in both the COVID-19 and alleged harassment matters, The Wall Street Journal reported. Abramowitz did not immediately respond to a request for comment from the Daily Caller News Foundation.

Today, we received a referral letter providing our office the authority to move forward with an independent investigation into allegations of sexual harassment claims made against Governor Cuomo.

At the close of the review, the findings will be disclosed in a public report.