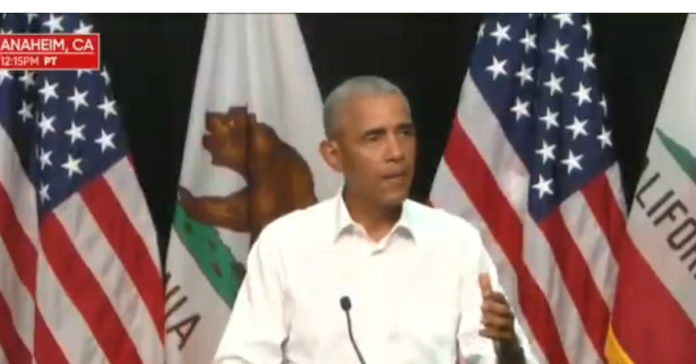 Barack Obama did it again. He went out to California to bash Trump at another campaign event and embarrassed himself.

I guess he missed the news that he just makes Trump voters more determined to vote in the midterm, not less. And as for the youth vote he is counting on…good luck, young people never vote.

Today tried to go after Trump for causing gridlock in Washington but ended up smacking himself in the face instead when it was revealed that since he left office there has been no gridlock.

Just smooth sailing for Trump’s agenda. In other words, he was the problem and removing him was the solution. As reported by The Hill:

“It’s always tempting for politicians for their own gain and for people in power to try to see if they can divide people, scapegoat folks, turn them on each other, because when that happens you get gridlock and government doesn’t work and people get cynical and decide to not participate,” he said.

“That, unfortunately, has been a spiral we’ve been on for the last couple of years,” Obama continued. “If we don’t step up, things can get worse.”

Obama called for voters of all ages, but particularly young people with historically low turnout rates in midterm elections, to put in the work to “restore some sanity in our politics” and flip the U.S. House.

“The only way we reverse that cycle … is when each of us as citizens step up and say, ‘We’re going to take it on ourselves to do things different. We’re going to fight for the things we believe in,’” Obama said.

“The biggest threat to our democracy … is not one individual, is not one big super PAC billionaire. It’s apathy, it’s indifference. It’s us not doing what we’re supposed to do,” he added.

Obama: "It's always tempting for politicians, for their own gain, and for people in power, to try to see if they can divide people, scapegoat folks, turn them on each other" https://t.co/HvrbzYN89C pic.twitter.com/8kHMNZdIuQ

Obama: "The biggest threat to our democracy…it's not one individual. It's not one big Super PAC, billionaires. It's apathy, it's indifference. It's us not doing what we're supposed to do" https://t.co/HvrbzYN89C pic.twitter.com/NnAQMDFw5n