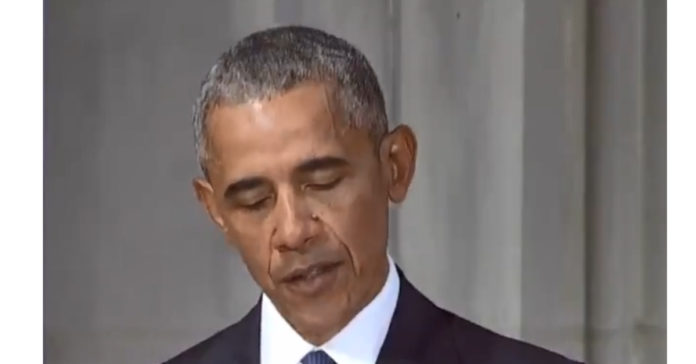 Pride and arrogance go before the fall as Barack Obama just found out the hard way. Look, if he just kept quiet no one would know, but he had to demand special treatment to hide his tracks.

He doesn’t want any American to know he is cashing in even more than crooked Hillary and dodgy dollar Bill.

No one thought that was possible but based on these numbers it seems probable.

As reported by The Daily Caller: Representatives for Barack Obama have threatened to cancel the former president’s upcoming paid speech at a Denmark university if details of his speaking contract are released to the public.

Obama will participate in a moderated question and answer session on Sept. 28 at the University of Southern Denmark before local business leaders, university students and local dignitaries, according to Business Kolding, the event’s organizer.

But the event has already sparked criticism from citizens of Denmark’s Kolding Municipality, which is providing 750,000 kroner, or $117,000, in taxpayer funds to support the behind-closed-doors event titled “A Conversation with President Barack Obama.”

Kolding currently faces a deficit of 100 million kroner in its next year’s budget. The town’s mayor, Jørn Pedersen, justified using taxpayer dollars to fund Obama’s invite-only talk, claiming the event is effectively a marketing opportunity for the town, according to Danish news outlet JydskeVestkysten.

“At this event, current and future leaders will have an opportunity to experience President Obama first hand. Everyone can expect to be inspired. And we have every reason to be proud,” Kolding Mayor Jørn Pedersen said.

But Pedersen said he has been kept in the dark by the event’s organizers regarding the total cost of hosting Obama’s talk. (RELATED: Reporters Told To Not Report On Obama Speech)

When pressed by a local news outlet for more information, Business Kolding said the Obama team would cancel the event outright if details surrounding his speaking contract were released to the public.

Despite efforts to keep the media in the dark, JydskeVestkyn estimates Obama will rake in up to two million kroner, or $312,000, for partaking in the event.

The University of Southern Denmark anticipates that Obama’s visit will “boost” the university’s prestige.

“SDU is an international university with a strong vision. We wish to break down barriers and mould the future. We are convinced that President Barack Obama’s visit will give us a tremendous boost,” said Henrik Dam, the university’s vice-chancellor.

“As a regional player, this is a unique opportunity for us to support an exceptional event here in the Region of Southern Denmark. It is an event that in every possible way promotes SDU’s strategic goals of being an international university, enabling every talent and encouraging the exceptional,” added pro-vice-chancellor Bjarne Graabech Sørensen.