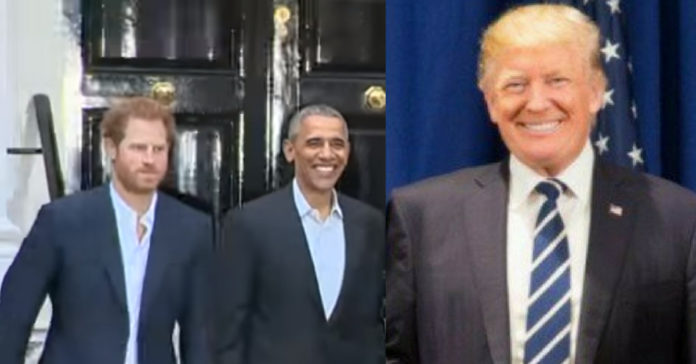 Much has been made in the media over Prince Harry’s affection for President Barack Obama and his wife Michelle.

Hey, the Royal family are politicians too. But the media slyly, such is their way, also took a few shots at Trump when reporting on Obama’s royal friendship.

As if Harry and the rest were against Trump…that was the implication by the media and as usual, they got it all wrong.

Prince Harry urged giving Trump a chance, the father of the former Meghan Markle said, explaining that he talked politics with the prince over the phone.

Thomas Markle told broadcaster ITV on Monday that he had several phone conversations with Harry, including one in which the prince asked for permission to marry his daughter.

Markle said President Donald Trump was discussed at least once: “Our conversation was I was complaining about not liking Donald Trump, he said ‘give Donald Trump a chance’. I sort of disagreed with that.”

Markle said he also asked his future son-in-law about Britain’s 2016 decision to leave the European Union and got the impression Harry is comfortable with Brexit.

“I think he was open to the experiment,” Markle said.

Markle said he gave Harry permission to marry his daughter over the phone.

“Harry asked for her hand on the phone and I said: ‘You are a gentleman, promise me you will never raise your hand against my daughter and of course I will grant you my permission. “

Look, Trump is misunderstood and such is the fever against him in the media that his supporters stay silent.

But that doesn’t mean they ain’t out there and in high places too.