Donald Trump does not have a bigger enemy than Rosie O’Donnell.  🙂

Tomorrow while President Trump is making final preparations for his address to the Joint Session of Congress tomorrow night, washed up comedienne Rosie O’Donnell will be leading a protest outside the White House. According to Rosie’s organization “The rally will feature speakers from diverse organizations and groups of people who have been impacted and harmed by the Trump administration’s policies, including women, people of color and members of the LGBTQ community, as well as environmental and immigrants’ rights groups.” (VIDEO BELOW)

What’s interesting is Donald J. Trump is all for women, people of color, members of the LGBTQ community, the environment and legal immigrants’ rights.  He just isn’t for Rosie O’Donell.   The last standing feud between these two started way before Trump every decided to run for president. (VIDEO BELOW)

So far President Trump has been working day and night to fulfill all the promises he made on the campaign trail.   Rosie only made one promise and she has reneged on her promise.  In other words she lied.  She said she would move to Canada if Donald J. Trump was elected. He was elected.  She’s still here.  (VIDEO BELOW)

#ManTheHarpoons gonna need a YUGE javelin for this whale pic.twitter.com/lNkwNwTvo9

I thought Rosie was going to leave the country
if the donald was elected.
Thought she might be in Canada by now 🇨🇦

If you think Rosie should move to Canada please SHARE this now!

Here’s what Donald Trump had to say about Rosie O’Donell.  No,it’s not very presidential but it’s all TRUE and he was not president back then.  🙂

Make no mistake, we have never been fans of Rosie O’Donnell. When she tweeted horrible lies about President-elect Donald Trump on New Years Day, calling him “mentally unstable,” we were outraged!  Then when she said horrible things about 10 year old Baron Trump, we were really outrage. However, we hope she has much better luck than she did last time she tried to leave the house.

Why would a woman who weighs more than 400 pounds even think about jumping from a plane? We want her to leave the country “IN” a plane, but now like this. We are glad she recovered and wish here safe protesting tomorrow.

*** Disclaimer:  The skydiving thing is a JOKE!  It is a funny (maybe) joke for Trump supporters. This is not FAKE NEWS. No one is supposed to think this is real. Even if you are a Democrat, give yourself a little credit.   No one thinks you are stupid enough to believe this is real.   If you think this picture is real start over and read this again, beginning with the first asterisk.  The asterisk is that little star looking thing. We did not create picture.  Someone sent us the picture in our Facebook mailbox at TD Newswire.  🙂

Please SHARE this article if you would like to see Rosie keep her promise and move to Canada! 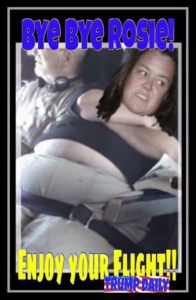