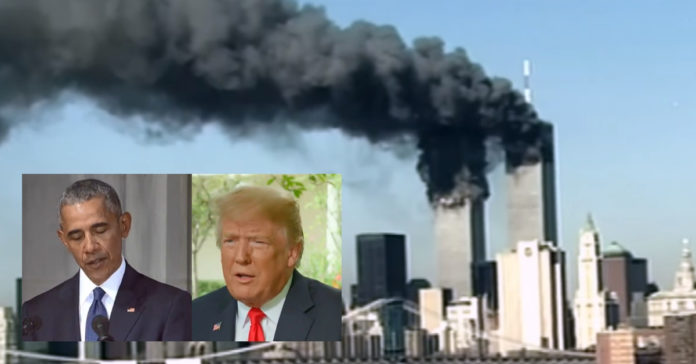 The crazy debate some on the left are having over whether Trump or Obama should get credit for Trump’s economy is laughable.

Look, forget the economy because America does not have a state-run system, instead we have a free market.

And that free market and our freedoms must be protected by all enemies and that is where Obama and the left lost America.

Radical terror of the Islamic variety is a problem that can be solved but only if you admit it exists.

And in that Trump puts Obama to shame

As reported by Breitbart: President Donald Trump proclaimed September 11th as Patriot Day, acknowledging that the United States was attacked by radical Islamic terrorists on this day in 2001.

“Although that fateful Tuesday 17 years ago began like any other, it erupted into horror and anguish when radical Islamist terrorists carried out an unprecedented attack on our homeland,” Trump wrote in his proclamation, noting that the terrorists were “enemies of liberty.”

Trump recalled the unity that Americans experienced in the wake of the attacks.

“When America is united, no force on Earth can break us apart,” he wrote. “Our values endure; our people thrive; our Nation prevails; and the memory of our loved ones never fades.”

Trump honored the nearly 3,000 victims who died in the September 11th attacks as well as the acts of heroism by first responders, law enforcement, firefighters, and the passengers and crew of Flight 93.

“The noble sacrifices of these true patriots are forged into the great history of America,” he wrote. “Today, we honor the memories of the souls we lost on September 11, 2001, and pay tribute to all of the patriots who have sacrificed their lives in defense of freedom.”