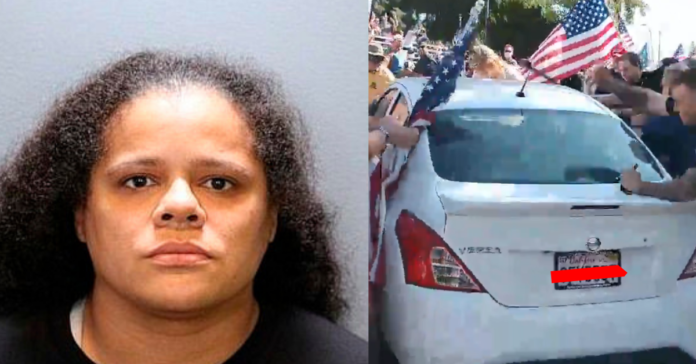 The organizer of a California BLM rally has been charged with attempted murder after prosecutors claim she tried to kill Trump supporters with her vehicle.

Tatiana Turner got the bad news from the Orange County prosecutors today who argued she drove into a crowd of counterprotesters with “the intent to kill.”

“She positioned her vehicle to be used as a backup weapon and she used that vehicle as a deadly weapon, willing to injure and kill those who stood in her way,” District Attorney Todd Spitzer said in a statement announcing the charges.

The organizer of a Southern California Black Lives Matter rally was charged with attempted murder Tuesday for driving her car into counter-protesters and running over a woman’s head.

Tatiana Turner, 40, of Long Beach deliberately drove into a crowd of President Donald Trump’s supporters with the intent to kill the woman and also seriously injured a man who broke his leg, Orange County prosecutors said.

‘She positioned her vehicle to be used as a backup weapon and she used that vehicle as a deadly weapon, willing to injure and kill those who stood in her way,’ District Attorney Todd Spitzer said in a statement.

But a defense lawyer said Turner tried unsuccessfully to get help from cops Saturday in Yorba Linda after her group was overwhelmed by a hostile crowd.

Turner saw people with guns and feared for her life when she got into her car that was blocked by Trump supporters, attorney Ludlow Creary II said…

…The Orange County Sheriff’s Department, however, has claimed Turner was not in any danger when she accelerated.

‘It did not appear from the video we’ve been able to see that there was a direct threat,’ spokeswoman Carrie Braun said.

‘I wasn’t there and wasn’t sitting in the vehicle. I don’t want to say what she could, would or should have done. Clearly any time an incident like this occurs it’s tragic for everybody involved.’

Turner made her first appearance in court remotely from the jail and was ordered held on $1 million bail. A not guilty plea was entered on her behalf by her lawyer.

According to NBC Los Angeles, the charges hold a potential life sentence.

Turner, who has a felony record for drug sales and domestic violence, is also charged with six counts of assault with a deadly weapon, including one count for causing great bodily injury, mayhem, and two counts of the use of pepper spray by a felon.

Turner’s group, Urban Organizers Coalition, had planned a peaceful march Saturday at the Yorba Linda Library, about 30 miles (48 kilometers) southeast of Los Angeles. But they were quickly outnumbered and threatened by the other group, Creary said.

The DA, however, referred to Turner’s group as “professional militant organizers.” Turner was seen in videos waving a baton and spraying what appeared to be pepper spray earlier in the protest. Some members of her group had helmets and riot shields.

Creary said the charges were excessive.

“In my opinion, it’s a message to activists that go to OC,” Creary said. “They want to let them know that they’re going to push to the full extent of the law against activists. Again, it’s part of the hostile environment.”