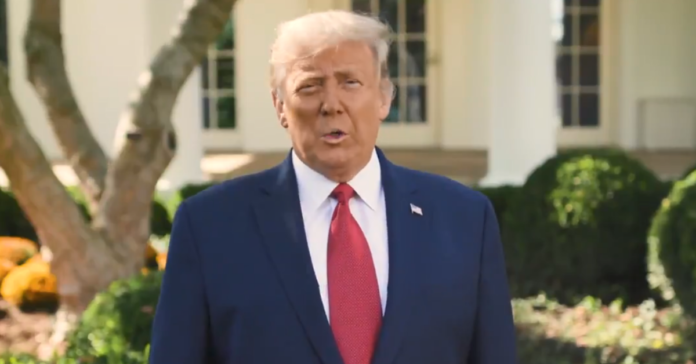 Former President Donald Trump will break his silence today at CPAC when he makes his first big post-presidency political speech.

Many expect Trump to announce that he will run again in 2024 but aides say he will come close to announcing and will drop huge hints but will not make a formal announcement today.

Trump, of course, does not follow scripts so he may still surprise on that front. Staffers say Trump will drop the hammer on some Republicans who broke with him over impeachment especially Liz Cheney.

He may go after Kevin McCarthy according to numerous reports for his inability to reign in Cheney and he may take a few swipes at Mitch McConnell too.

But the overall theme, according to an excerpt obtained by Fox News will be unity and strength not division.

Trump will officially say he is not starting a new political party and will instead look to make the GOP stronger and more competitive heading into 2022.

“We are not starting new parties, and we will not be dividing our power and our strength. Instead, we will be united and strong like never before,” Trump is expected to say.

Trump will also target Biden’s first month in office, much of which has been spent dismantling a lot of what Trump did.

While the former president and McCarthy are on good terms, the senior adviser said, “There’s a 99.99% chance Liz Cheney gets brought up.”

As for Mr. Trump’s thoughts on Mr. Biden, “Immigration will be like issue one, two and three —  amnesty, stopping wall constriction and expanding refugee access from dangerous countries,” the senior adviser said.

But the former president is also expected to attack the Biden administration’s failure thus far to oversee a national reopening of schools and he will strongly defend the Trump administration’s work to help fund the development and distribution of COVID-19 vaccines.

“He will defend his vaccine work and be about as subtle as a two by four about it,” the senior adviser said.

In recent weeks, Mr. Biden has incorrectly said that there was “no real plan to vaccinate most of the country” from the outgoing Trump administration, a claim he’s backed off of in recent public remarks about vaccine development. Mr. Trump on Sunday is likely to tout his administration’s “Operation Warp Speed,” which provided government funding for the private-sector development of COVID-19 vaccines now being produced and distributed around the world.

Mr. Trump is also expected to train his ire on the Biden administration’s early use of executive authorities to halt multibillion construction of new wall along the U.S.-Mexico border; lift historically low limits on the number of refugees that can be admitted annually into the United States; and plans to extend protections to tens of thousands of people under Temporary Protected Status from countries including El Salvador, Haiti and Syria.

The senior adviser said the former president is also concerned about the Biden administration’s early focus on diversity and tackling systemic racism across society.

“The efforts that they’ve been pushing, like social engineering nonsense, is what the former president is very concerned about,” said the adviser.