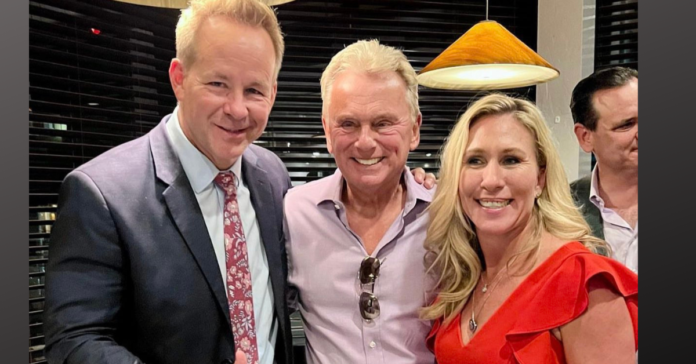 Long-time Wheel of Fortune host Pat Sajak enraged the left after a photo of him with GOP Representative Marjorie Taylor Greene went viral.

Sajak is a Republican and served on the board of a conservative publishing company that released titles from Rush Limbaugh so this shouldn’t have come as a surprise. But the left lashed out on social media anyway.

According to Newsweek: “In his tweets criticizing Sajak, documentary filmmaker Jeremy Newberger said that Greene had appeared at the America First Political Action Conference in Orlando…

“Due to this association, Newberger accused Sajak of “posing with Nazis,” even sharing a photo of the iconic Wheel of Fortune letter board with the phrase on it.

“It’s only been 8 months since Marjorie Taylor Greene gave the keynote at a Nazi rally where the organizer praised Adolf Hitler,” Newberger tweeted.

“So by all means, Pat Sajak, take some selfies with her. Looks like the Wheel of Fortune is morally bankrupt.’

“The company you keep is quite unfortunate [Pat Sajak],” retired journalist Diana Gonzalez tweeted in response to the PatriotTakes post. “Will be changing the channel when you spin the wheel.”

I'd like to solve the puzzle, Pat Sajak. pic.twitter.com/rP0lPmlBfi