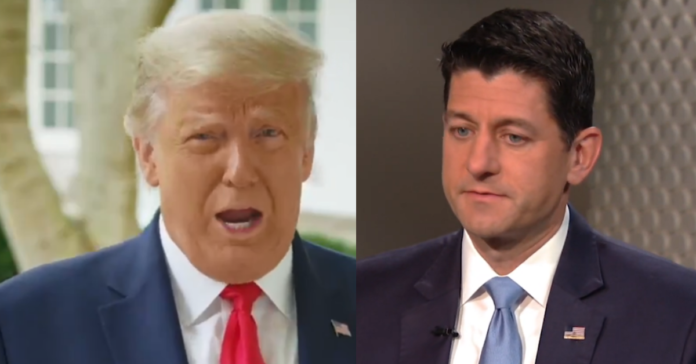 Former House Speaker Paul Ryan (R) will snub former President Donald Trump and will headline a fundraiser for Rep. Adam Kinzinger (R-Ill.), a Trump nemesis. Ryan has been feuding with Trump almost from the start so this does not come as a huge surprise.

What will be surprising is if the turnout is huge as Ryan was despised by the base as a sellout towards the end of his political career. Kinzinger, the Illinois Republican,  has continued the feud for Ryan it seems in Congress.

“I think what I’m used to saying to any Republican that’s maybe kind of confused by the moment we’re in is policy doesn’t matter anymore. It literally is all your loyalty to Donald Trump. As I’ve said before, this is something that like echoes a little bit out of North Korea, where no matter what policy comes out, you’re loyal to the guy,” Kinzinger told NBC News’ Meet the Press Sunday.

The big picture: “It’s a decisive move against ex-President Donald Trump, who has set his sights on Republicans who voted to impeach him,” Politico writes.

Kinzinger was one of the 10 Republicans who voted to impeach Trump for inciting the Jan. 6 insurrection, and has been one of the GOP’s most prominent critics of the ex-president.

Ryan in November called on Trump to accept the presidential election results and “embrace the transfer of power.” The former speaker also told Republicans in 2016 that they “should feel free to abandon Trump.”

This is not the first time Ryan has gone after Trump. He ripped the former president in a recent Politico interview:

“He started with some throat-clearing, touting the “legal substance that stands a longer test of time” than Trump’s demagoguery — a restructured tax code, a bigger military, a conservative judiciary.

But Ryan’s grimace gave him away. It was obvious, as he went on talking about the “disruption” roiling the nation and how America has endured “ugly” periods before, that Ryan had begun to reckon with the legacy of Trumpism and his role in accessorizing it. It didn’t take much poking for the dam to burst.

“We’ve gotten so numb to it all,” he told me. “Not in government, but where we live our lives. We have a responsibility to try and rebuild. Don’t call a woman a ‘horse face.’ Don’t cheat on your wife. Don’t cheat on anything. Be a good person. Set a good example. And prop up other institutions that do the same. You know?”

Ryan recognized the gravity of what he was saying and the backlash it would invite from the most powerful man in the world. He also seemed to anticipate the outrage it would elicit from critics who would demand to know: Why not push back on the president’s misdeeds while still holding the second-most powerful job in government?

“I felt a major onset of responsibility to help the institutions survive,” Ryan recalled, telling me how he didn’t sleep one wink on election night 2016.

“So, from the next day on, my mantra was: ‘Only one person can be speaker of the House. I’m not a pundit, I’m not a think-tanker. Our job from now on is to build up the country’s antibodies … to have the guardrails up, to drive the car down the middle of the road, and don’t let the car go off into the ditch.’”

Ryan added: “I told myself, I got to have a relationship with this guy to help him get his mind right. Because, I’m telling you, he didn’t know anything about government.

So I thought, I can’t be his scold, like I was. … I wanted to scold him all the time. What I learned as I went on, to scratch that itch, I had to do it in private. So, I did it in private—all the time. And he actually ended up kind of appreciating it. We had more arguments with each other than pleasant conversations, over the last two years. And it never leaked.”