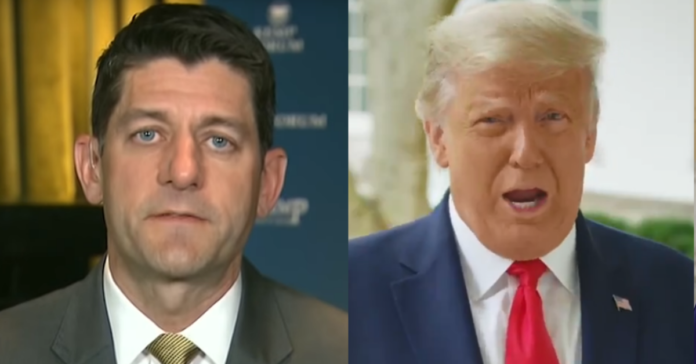 Paul Ryan, former House speaker and current member of the board of directors at Fox News is set to enrage former President Donald Trump today in a speech in California. Ryan cashed in and joined the swamp with the Fox no-show job, a lucrative SPAC, and a gig in private equity so his credibility is at an all-time low.

He will speak this evening at the Reagan Library in Simi Valley, Calif., Punchbowl news got their hands on some excerpts of the speech and Trump will not be happy. Ryan will echo Liz Cheney and say the GOP is at a defining moment and the party should reject the ‘appeal of one personality.’

Ryan will also call out other Republican politicians saying that if the GOP is focused on one personality ‘or on second-rate imitations’ the future of the party is bleak, ‘then we’re not going anywhere.’

Ryan will say: “Once again, we conservatives find ourselves at a crossroads.  And here’s one reality we have to face. If the conservative cause depends on the populist appeal of one personality, or on second-rate imitations, then we’re not going anywhere.

“We win majorities by directing our loyalty and respect to voters, and by staying faithful to the conservative principles that unite us.

“This was true even when the person leading our movement was as impressive, polished, and agreeable as they come.” …

“In 2020, the country wanted a nice guy who would move to the center and depolarize our politics. Instead, we got a nice guy pursuing an agenda more leftist than any president in my lifetime.

“These policies might have the full approval of his progressive supporters, but they break faith with the middle-of-the-road folks who made the difference for him on Election Day.

“For conservatives, this painful existence as the opposition can actually be an opportunity.  Out of these years can come a healthy, growing, and united conservative movement, a movement that speaks again to the heart of a great nation.” …

“As the left gets more ‘woke,’ the rest of America is getting weary.  It’s exhausting.  And we conservatives have to be careful not to get caught up in every little cultural battle.

“Sometimes these skirmishes are just creations of outrage peddlers, detached from reality and not worth anybody’s time.  They draw attention away from the far more important case we must make to the American people.

“Culture matters, yes, but our party must be defined by more than a tussle over the latest grievance or perceived slight. We must not let them take priority over solutions ­– grounded in principle – to improve people’s lives,” he will say.

Former House Speaker Paul Ryan is expected to say in a speech Thursday night that Republicans must move away from the "populist appeal of one personality" because "then we're not going anywhere," according to excerpts obtained by CNN. https://t.co/P5WYR1gGAE