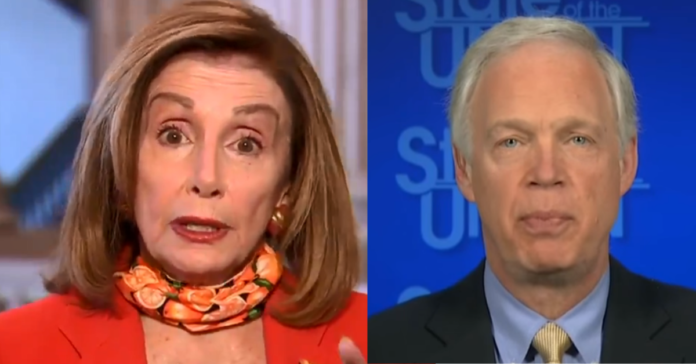 Speaker Nancy Pelosi (D-Calif.) made an embarrassing flub today and forget Sen. Ron Johnson (R-Wis.) name in the middle of a speech. Some think she took a veiled shot at him and flubbed his name on purpose? (See video below)

She called him “Don Johnson” in a press briefing today before she took a swipe at the Wisconsin senator saying he appeared to be “taking the lead” on the GOP response to the Jan. 6 attack at the U.S. Capitol.

“Don Johnson— was his first name Don?” Pelosi said. She was quickly corrected by White House reporters to which Pelosi said, “Let me call him ‘senator,’ not ‘Miami Vice’ or anything like that.”

“Ron Johnson seems to be taking the lead on what the scope would be of how we look at protecting our country from domestic terrorism,” she added.

In other news, AOC is not happy with a police robot. From The New York Post:

Alexandria Ocasio-Cortez growled on Twitter on Thursday about the NYPD’s new robotic dog, which was tested on her home turf in the Bronx this week.

“Shout out to everyone who fought against community advocates who demanded these resources go to investments like school counseling instead,” the New York Congresswoman tweeted out.

“Now robotic surveillance ground drones are being deployed for testing on low-income communities of color with under-resourced schools,” Ocasio-Cortez wrote.

The four-legged “Digidog,” deployed at the scene of a home invasion in the Bronx this week, is getting a test run as the NYPD’s newest crime-fighting weapon.

Pelosi says Johnson “seems to be taking the lead” on Republican response to January 6 insurrection. pic.twitter.com/c7YDtdonDV