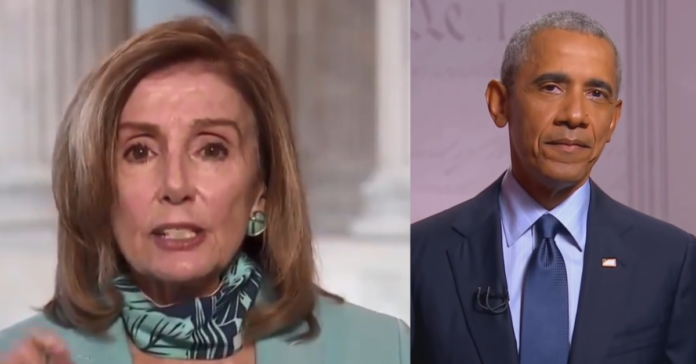 Nancy Pelosi is breaking her silence in a new biography, “Madam Speaker: Nancy Pelosi and the Lessons of Power,” due out April 20 by USA Today Washington bureau chief Susan Page.  Pelosi and her inner circle spoke with Page numerous times and it seems from the first few excerpts released that Nancy is settling some old political scores.

Pelosi took swipes at AOC and the Squad after the freshmen Congresswomen threatened her tight grip on the House Dems. Page caught Pelosi at the right time – when she was annoyed with AOC for something and said this about AOC: “You’re not a one-person show. This is the Congress of the United States.”

Ouch but that pales in comparison to the veiled shot she took at Obama over her signature legislation – Obamacare. According to Axios, Pelosi was not happy with Obama hogging all the credit for passing Obamacare when it was her ability to twist arms and even convince some Dems Reps to take the loss in the next election to get it passed.

Look, she has a point here and it happened with Trump too. Trump gets and deserves most of the credit for passing the new NAFTA but people forget Trump couldn’t get it passed with Paul Ryan as Speaker because he is a corporate shill. It was Pelosi who got the Dems in the House in line to pass it.

“Mitch McConnell,” the speaker said, “is not a force for good in the country. He is an enabler of some of the worst stuff, and an instigator of some of it on his own.”

Pelosi scoffs at President Obama for not being able to deliver his home state votes for Obamacare — “Why are we having a problem with Illinois?” — and bristles at Obama getting sole credit for the deals she got through Congress.

The speaker said she learned the art of politics from her father, Baltimore Mayor Thomas D’Alesandro: “What I learned from my father was everything … I breathed it in … Politics is every minute of every day. It is part of you.”

Here’s how she described her job: “Every day I’m like, ‘Don a suit of armor, put on your brass knuckles, eat nails for breakfast, and go out there and stop them from taking children out of the arms of their parents, food out of the mouths of babies.” She didn’t see all that as particularly remarkable. “I mean, it’s just the way it is.”

Her attitude of politics-as-war fueled the capital’s hyperpartisanship. The Republican Speaker who succeeded her, John Boehner, told me that she didn’t moderate her rhetoric even when he tried to do so. President George W. Bush privately complained to aides that she was unwilling to respond to his outstretched hand. Even Democrat Barack Obama told a senior White House aide that he felt at times as though she was hectoring him. Pelosi only had one gear – full steam ahead – even when the occasion might have welcomed a lighter touch.

That said, it was a trait her allies came to appreciate.

“The one thing that I understood about Nancy fairly quickly was the fact that she was as tough or tougher than anybody in the world,” Obama told me, declaring himself “a booster” of Pelosi. “There are times that I think we underestimate just that kind of being able to grind and grit it out, and she has that kind of capacity.” He called her “as effective as any legislative leader I’ve seen in managing a diverse and often contentious group of folks with a lot of different points of view.”

Boehner told me she was “one of the top leaders that I’ve worked with over my career, no question.” But he added that her unyielding liberal ideology opened the door for the GOP to win back control and make him her successor as Speaker in 2011.

The long and unexpected course of Pelosi’s life prepared her to face down a disruptive president during a critical time. The youngest child and only daughter in a family with five brothers, she had figured out from an early age how to assert herself in a male-dominated world. She had been trained in politics by her larger-than-life father, the mayor known to all in Baltimore as Tommy the Elder. She had learned about the art of granting favors and organizing the grass roots from her ambitious, restless mother, known as Big Nancy.

She had risen in the Democratic Party as a formidable fund-raiser from the opposite coast, where the Democratic base was shifting. She had confronted a string of presidents on a variety of issues.

From her first meeting in the White House with Trump, just three days after his inauguration, she would be the figure in the room willing and able to push back at his provocative declarations, the ones she saw as at odds with reality and, eventually, as dangerous to democracy. It was her ability to stand up to President Donald Trump that finally meant Nancy D’Alesandro Pelosi would be underestimated no more.