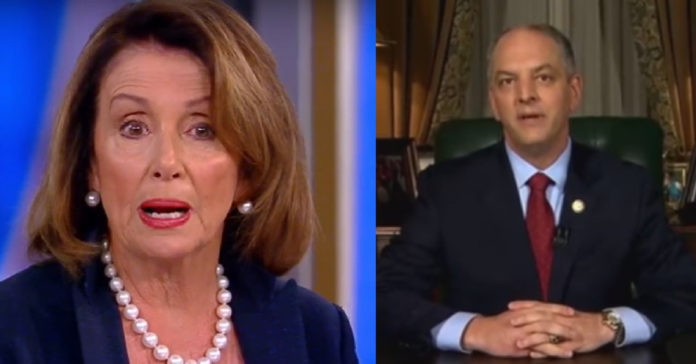 Nancy Pelosi’s iron grip on power is loosening, her reign of terror may be coming to an end.

Pelosi wields enormous power because she is a prodigious fundraiser. And she spreads around that cash.

She keeps everyone in line with the dollars she raises from deep-pocket donors and sets agendas that are meant for that donor class.

The Democrats were too frightened to resist and followed her to ruin.

From the Free Beacon:

Edwards bucked the national Democratic Party, which has long endorsed access to abortion in its official platform, Wednesday by announcing he had signed a bill banning abortion after 15 weeks.

The legislation, known as Senate Bill 181, was championed by Democratic state senator John Milkovich and amassed bipartisan support in both chambers of the Louisiana State Legislature. Apart from prohibiting abortion after a pregnancy surpasses 15 weeks “gestational age,” the law also imposes a penalty of up to two years in prison and a $1,000 fine for medical providers in violation.

We all remember when Dick Durbin and other leaders said there should be a pro-choice litmus test for Democratic candidates.

Seems Pelosi is losing her grip on power, expect more revolts to follow as the Democrats can’t survive more of her failures.