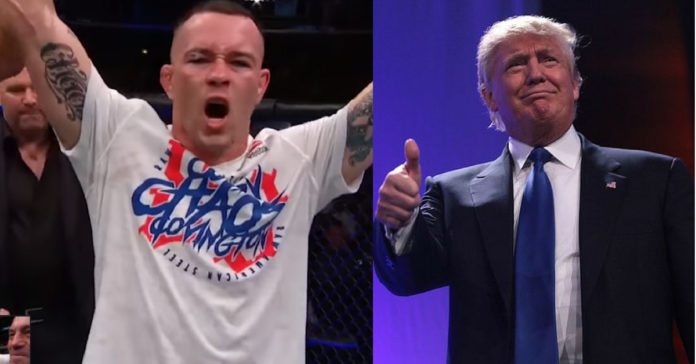 The Philadelphia Eagles just got humiliated on national TV and they deserve it. They disgraced themselves by what they tried to pull with Trump, and they just got a lesson in manners and respect from the unlikeliest of places.

After winning his title, the UFC’s new interim welterweight champion Colby Covington said that unlike the “Filthadelphia Eagles,” he would be proud to visit the White House and celebrate his win.

After taking down Rafael Dos Anjos in a unanimous decision in Saturday night’s bout, Covington took the microphone to taunt the Eagles, and maybe even some of the liberal fans in the Chicago audience at the city’s United Center arena, the Washington Times said.

“I’m going to do what a real American should do. I’m bringing this belt to the White House, and I’m putting it on Donald Trump’s desk,” he said immediately after the decision was announced. Some of the Chicago fans booed after his proclamation.

The trash-talking fighter continued his exclamations about visiting the White House in several subsequent interviews.

In a post-fight presser, Colby reiterated his White House comments saying, “I told everybody I was going to make the welterweight division great again,” adding, “A real American should … Unlike the Filthadelphia Eagles disrespecting our flag and kneeling for the national anthem.”