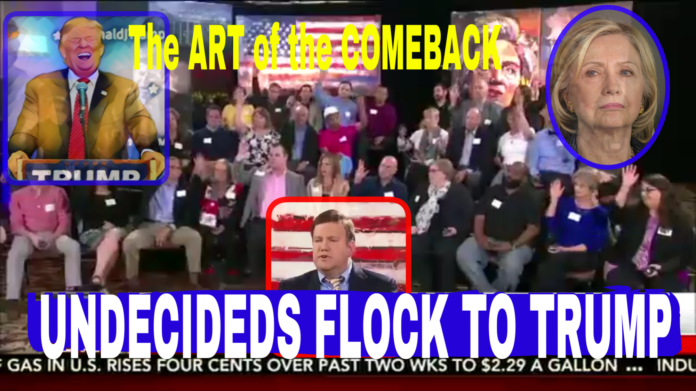 Here’s the video…. see it for yourself and then SHARE this out.  The dishonest media will try to slant and minimize this later in the day.  We need everyone to see this.  We’re running out of time friends.   🙂

Focus Group: Who are you willing to vote for?

After the live on air poll of his focus group, Republican pollster Frank Luntz admitted to FOX News’ Megan Kelly that  Donald Trump that he thought Trump was out of contention before the debate and that he was wrong and now feels Donald Trump is back in the game

“I may have made a mistake in writing off Trump,” pollster  Frank Luntz tweeted after the second presidential debate. “After talking with voters tonight, he’s back in this race.”

Luntz  tweeted  that Trump “had a sense of humor” and was “funny and ironic, not mean and nasty.” And folks Frank Luntz is no fan of Trump.  If the dishonest media says Trump did well than you know he hit it out of the park.

** WHAM BAM…THANK YOU DONALD!!   Please SHARE this before the DISHONEST MEDIA tries to spin this or bury it.

Following a tough week where a video tapd of Mr. Trump saying some unsavory things to Billy Bush 11 years ago, this was just what the Trump campaign to get back on track.

PRESIDENT TRUMP.  Get used to saying that folks because we ARE going to win but we all must persist and do our part.  Please SHARE this while it’s fresh.  The Crooked Hillary Camp and dishonest media will try to cover this up.