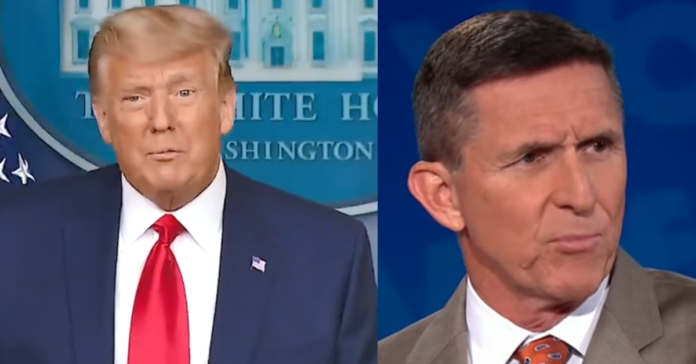 President Trump made his move and issued a pardon for Mike Flynn on Wednesday finally letting his first national security adviser get clear from Robert Mueller’s Russia investigation.

“It is my Great Honor to announce that General Michael T. Flynn has been granted a Full Pardon. Congratulations to @GenFlynn and his wonderful family, I know you will now have a truly fantastic Thanksgiving!” Trump said.

With New York appealing their loss in the Manafort case you can expect Trump to issue more pardons in the coming days.

The case had stalled as Flynn was awaiting sentencing for lying to the FBI. After a failed emergency appeal from Flynn’s legal team, U.S. District Court Judge Emmet Sullivan had been weighing the question of whether to grant the Justice Department’s sudden motion to drop its charges.

The DOJ reversed course on the prosecution in May, arguing that it no longer had confidence in the FBI investigation that led to Flynn’s interrogation in early 2017. The decision intensified questions about political interference in prosecutorial matters, coming just a few months after the DOJ overruled career prosecutors who had recommended a lengthy prison sentence for another Trump ally, the longtime GOP operative Roger Stone, who had just been convicted of lying to Congress and witness tampering.

Stone was ultimately sentenced to more than three years in prison, but Trump commuted his sentence in July, right before he was scheduled to report to a federal corrections facility.

Flynn’s tenure at the White House was both fleeting and chaotic. Trump fired Flynn in February 2017, less than a month after taking office, after it was revealed that the adviser withheld information to Vice President Mike Pence and other White House officials about his contacts with then-Russian ambassador Sergey Kislyak.

Trump’s base of supporters have advocated for a Flynn pardon. Trump has offered words of support for his former adviser and said that he was treated unfairly by the FBI in recent months, even going so far to say in July that he would welcome Flynn back in a role at the White House.

It is my Great Honor to announce that General Michael T. Flynn has been granted a Full Pardon. Congratulations to @GenFlynn and his wonderful family, I know you will now have a truly fantastic Thanksgiving!