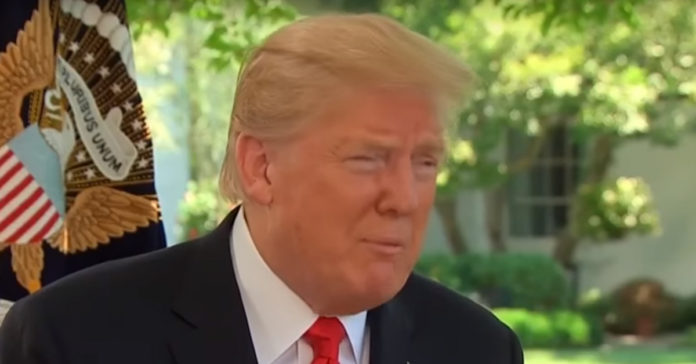 President Trump ran on a few main issues none bigger than stopping the biggest theft in world history.

That was of course committed against the United States of America by a few greedy politicians, a few even greedier corporate CEO’s and the Chinese government.

The looted America – the three of them – and ridiculously built China into a world power in the process.

It was the most unpatriotic thing ever done, and I won’t throw the treason word around that so many do carelessly against Trump, but it comes damn close.

It will go down as an even bigger blunder than the Iraq war. So Trump, looking only to level the playing field, was a bit shocked when China started to add more tariffs to their unfair trade deals.

Today he had enough. From The Free Beacon:

President Donald Trump told CNBC’s Joe Kernen he is ready to implement tariffs on all Chinese goods imported to the United States in order to reduce America’s trade deficit.

Kernen asked the president whether he would implement tariffs on all Chinese goods imported to the U.S.

“I’m ready to go to $500 [billion],” Trump said. “I’m not doing this for politics; I’m doing this to do the right thing for our country. We have been ripped off by China for a long time, and I told that to President Xi.”

China would not be able to match the U.S. in a back-and-forth tariff battle given that the U.S. imports significantly more from China. Nevertheless, China could take other actions in a trade war with the United States. Chinese leader Xi Jinping could decide to boycott U.S. companies operating in China, sell U.S. assets, or adjust its approach to geopolitical issues to pressure the U.S. to change its course on tariffs.